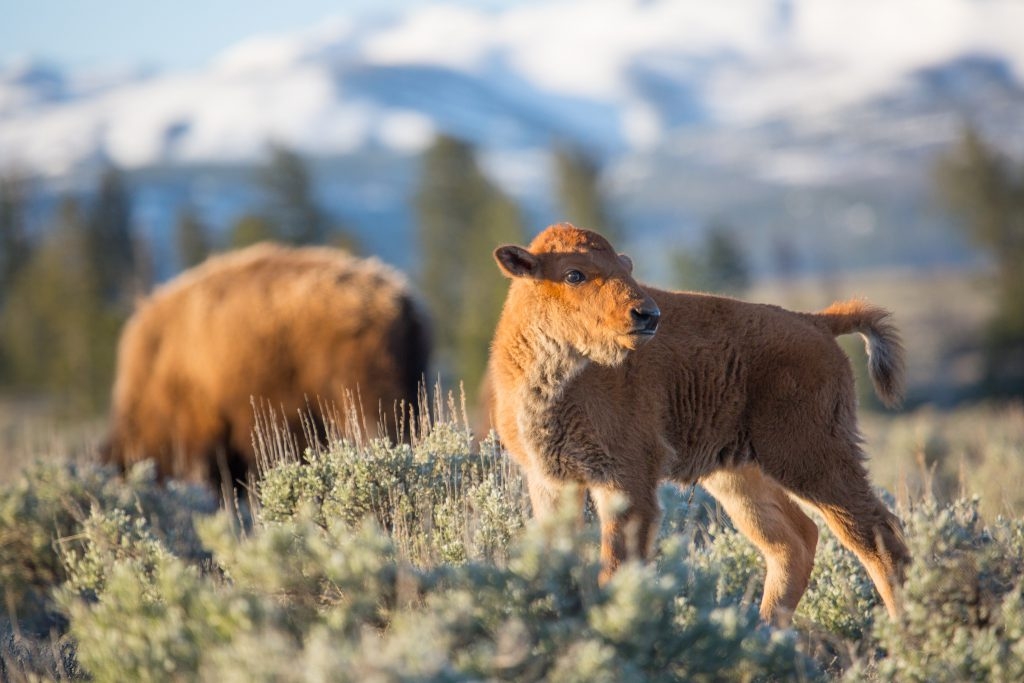 A moose calf wades across the Gallatin River behind its mother. Bear cubs pop up behind sagebrush, ears alert, then tumble into each other in play. Bighorn lambs nurse their mothers, who are themselves exhausted after a long winter. A spotted elk calf curls up in the grass, lying still where its mother has hidden it.

Big Sky is home to an astounding array of wildlife, from elk and deer to foxes, coyotes, wolves, and bears. The surrounding Greater Yellowstone Ecosystem has the largest concentration of mammals in the lower 48 states, including more than 60 species of mammals.

Spotting a moose out your bedroom window or seeing bison in Yellowstone never seems to get old. In spring, when many of these animals’ young are born, it’s even more exciting.

“Humans just love the cuteness of these little animals, and from a wildlife population perspective, it’s a really critical time period,” said Jesse DeVoe, a wildlife research technician with Montana Fish, Wildlife, and Parks. “The mothers have invested a whole lot of energy and time in pregnancy, and now they’ve given birth and they have to figure out how to keep these babies alive.”

There’s something about seeing these wild creatures as mothers and tender caretakers of their young that helps us understand them as fellow mammals. And when you learn what it took to bring this ecosystem back from near total ruin in the first half of the 20th Century, you can see how crucial it is for us to protect both this landscape and the wildlife that live here. 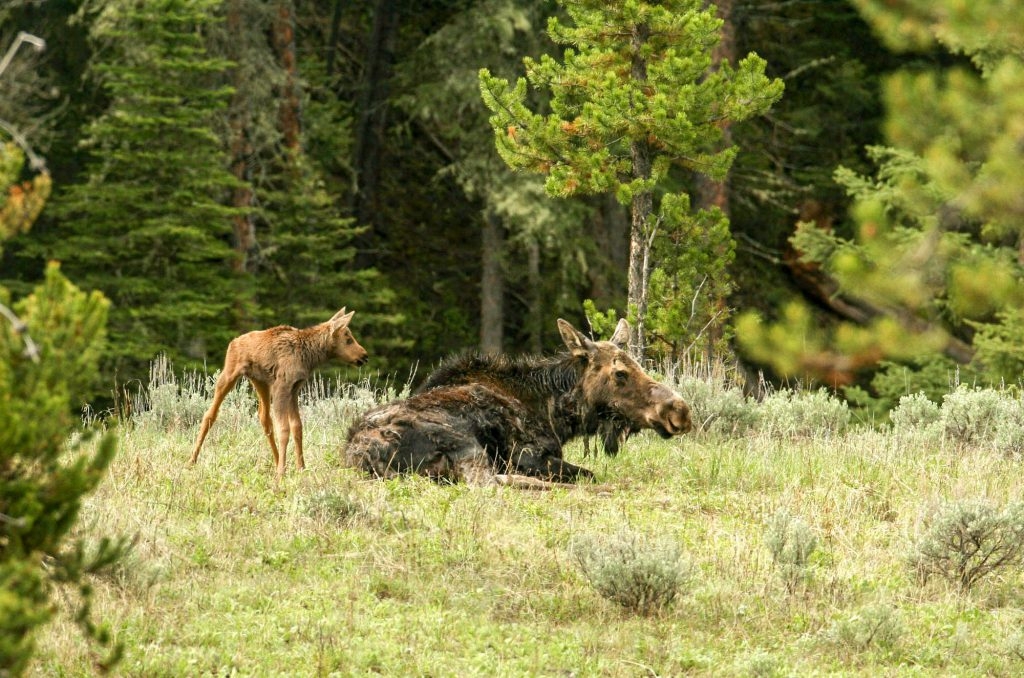 Moose are among the most common wildlife sightings in Big Sky, with the spindly-legged calves often browsing beside their mothers in the willows of the Meadow. Cow moose have their young in late May or June, and can be fiercely protective, known for chasing people long distances. An adult moose eats around 10 to 12 pounds of food daily in winter and up to 50 pounds a day in summer. Their long legs allow moose to wade into rivers and lakes to eat aquatic plants, and through deep snow to access subalpine fir needles. The moose population in Montana and the Greater Yellowstone has declined since the 1970s due to habitat loss, predation, and competition for food with elk and deer, but research also suggests that moose numbers follow a pattern of erupting, crashing, and then stabilizing for a time. Only bulls have antlers, while females have a distinguishing white patch below their tails, and both sexes have the pendulous hunk of skin and hair hanging from their throats called a “bell” or “dewlap.”

There’s something irresistible about bison calves. Perhaps it’s the contrast of their soft red fur against their mother’s dark manes, horns, and prehistoric-looking humps, or the calves’ surprisingly nimble legs. Either way, once you’ve seen them, you may want to return every year in April or May to see these babies of North America’s largest land animal. Calves stand within a few hours of birth, quickly imprinting on their mothers so they can find her by smell or sound in a herd. Pre-colonization, an estimated 30 million bison once roamed the Great Plains, but by the end of the 19th Century, fewer than 100 existed in the wild. Founded in 1872, Yellowstone was a bastion for their protection during this time. In 2021, scientists counted 5,450 bison between the park’s northern and central herds. 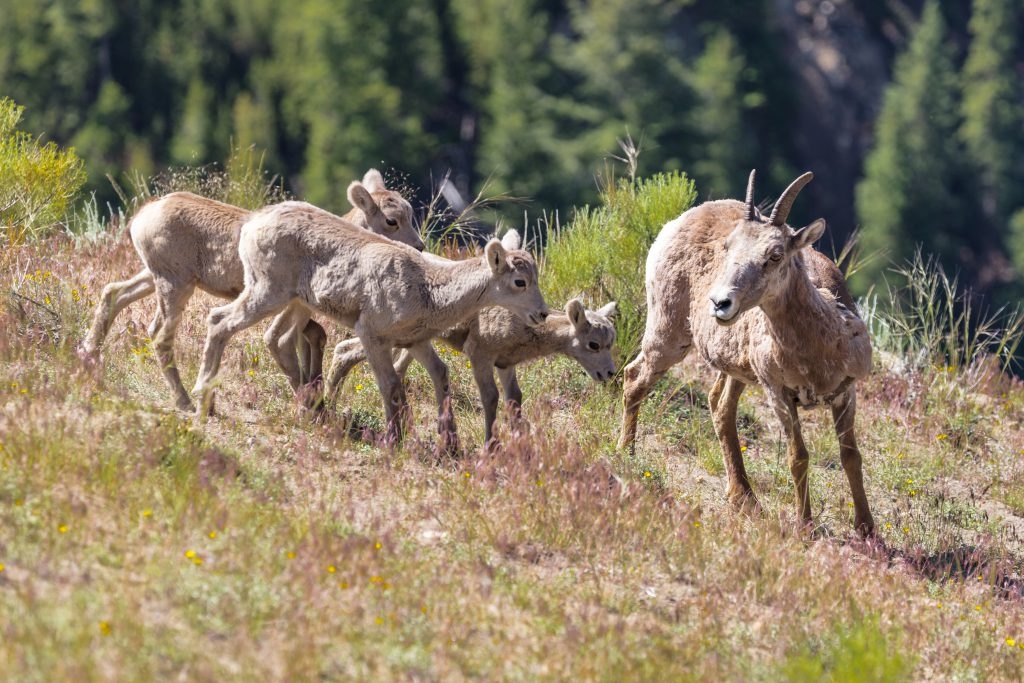 Bighorn ewes retreat alone to rocky cliffs to birth their lambs in May and June and keep their lambs in these high crags for their first couple weeks. Although they can avoid many predators this way, the ewes still have to watch for marauding mountain lions. Once they descend, the sheep are a common sight in Big Sky, especially on south-facing hillsides near the intersection of Lone Mountain Trail and Highway 191. This group, known as the Spanish Peaks herd, is one of few remaining native herds in Montana. Montana Fish, Wildlife and Parks counted 97 bighorns in the group in 2019, and 120 in the Taylor-Hilgard herd, which winters southwest of Big Sky. Comparatively, others were reintroduced elsewhere in the Rockies after original populations died due to habitat loss or respiratory disease contracted from domestic sheep. Both sexes have the namesake horns, with rams’ giant curls weighing up to 40 pounds. Two layers of shock-absorbing bone protect the rams’ brains from the impact of sparring with each other over mates. 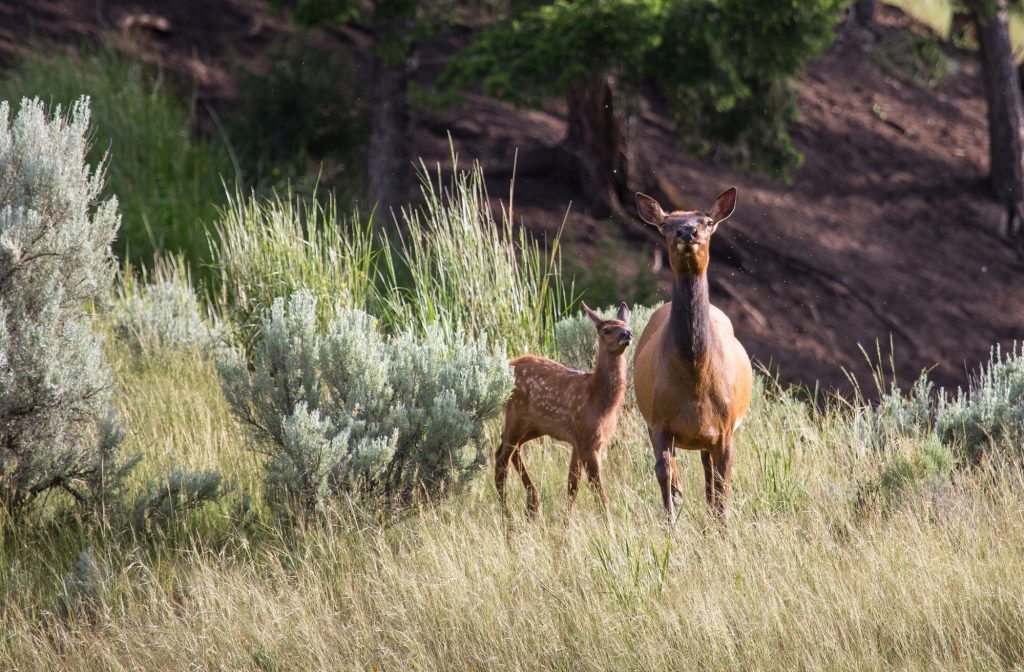 Like bison, bighorns, and other ungulates, cow elk separate from their herds in spring to give birth to their calves.  Newborn elk calves typically weigh around 30 pounds and are born spotted and scentless in late May or June. Known as “peak green-up,” this time of year is when vegetation is highest in nutrition, which helps the mother elk put on fat after the winter. Because elk calves aren’t mobile at first, a cow will hide her baby in dense forest or sagebrush, foraging nearby and returning occasionally to nurse. After a few days, the calf can run quickly to evade predators. Migrating seasonally to find food, elk eventually grow to around 500 pounds for females and 700 for males. Only bulls have antlers, which they grow and shed annually. Elk eat grasses, sedges, herbs, shrubs, aspen bark, conifer needles, burned bark, and aquatic plants.

Since their reintroduction to Yellowstone National Park in 1995, wolves have thrived, dispersing across the Northern Rockies, and today there are an estimated 1,150 wolves in Montana. Wolf pups are born in April in dens excavated under roots, boulders, hillsides, or caves, with a tunnel leading to one or more rooms. Litters average five pups, with the largest recorded in Yellowstone numbering 11. Pups emerge at around two weeks, their blue puppy eyes just beginning to open and their smell already thousands of times stronger than humans’. Although the alpha male and female are the only ones that breed, other members of the pack bring food to the mother while she nurses for up to three months, and help care for and play with the pups. This complex social order is key to wolf survival, as packs also work together to hunt and defend their territory from other wolves.

If you’ve skied at Big Sky long enough, you’ve probably glimpsed the fluid magic that is an ermine diving dolphin-like in and out of the snow to hunt. Also known as short-tailed weasels or stoats, these small, mostly nocturnal animals can leap three times their length and are white in winter (except for their black-tipped tails) and brown with white bellies in summer. Weighing between one to six ounces, ermine are voracious hunters that seize prey at the base of the skull or by the throat, eating rodents, rabbits, chipmunks, insects, and frogs. They nest in hollow trees, rock piles, or burrows, birthing kits in April or May, in litters of four to 13. The kits wean at five weeks and hunt independently at three months.

As of 2019, an estimated 728 grizzly bears lived in the Greater Yellowstone. While it’s an incredible recovery from the 136 living here in 1975, grizzlies are still listed as ‘threatened’ under the Endangered Species Act, and their population grows slowly, with females having their first cubs around age 6. They give birth during hibernation to blind, furless cubs—usually one to three per litter. Weighing around a pound each, the cubs grow approximately a pound every five days on mama bear’s high fat milk. The family emerges between February and May, and typically stays together for two years while the cubs learn from their mother the intricacies of finding food and shelter and defending themselves. As climate change causes more whitebark pine die offs, grizzlies are losing one of their main foods and are forced to seek other sources—sometimes driving them closer to Montana’s human populations.

Wild animals are unpredictable, and the safest way to view them is from inside a vehicle. Yellowstone National Park recommends staying at least 100 yards away from bears and wolves, and at least 25 yards away from all other animals, including bison and elk. If you encounter a young elk, moose or other animal seemingly frozen in hiding, it is important to leave it alone, says Montana Fish Wildlife and Parks Bozeman area biologist Julie Cunningham, explaining that people often think they are abandoned, but they rarely are. Cunningham also reminds people to always carry bear spray while hiking, keep dogs on leash, and never leave food, garbage or other scented items out. “People are a leading cause of bear mortality,” she said. “Leaving food out for bears can result in them becoming habituated and then lethally removed.”