Home Blog A New Record
Blog A New Record
UQ8zGhWD224 Rob Leipheimer has been skiing Big Sky Resort since he was a teenager. He had spent too much time indoors and choose to change his life. Instead of being inside everyday and skiing on the weekends, he choose to make skiing his life.
April 17th, 2019

It was 1 p.m. and Rob Leipheimer had just beat his Lone Peak Tram all-time record of 27 laps.

“I was doing five laps an hour,” he said. “I was thinking this is a really good pace.”

Recently, Leipheimer, 50, was talking to Luke Stratford, who some believed held the record for most tram laps in a single day. Stratford recorded 31 tram laps back in 1998.

“After I matched my personal record and had an hour still in the bank, I turned up the volume at that point,” Leipheimer said. “They were really fast laps after that.”

Leipheimer finished 35 Lone Peak Tram laps – a new record by many accounts. He started at 9:30 a.m. loading the first tramcar and was on the last tram of the day at 3:06 p.m.

Leipheimer has been skiing Big Sky Resort since he was a teenager. This season alone he’s already logged 80 days on the snow, a majority of them at the resort. He knows every route, rock, and ridgeline on Lone Mountain like the back of his hand.

Visibility, on this particular day, wasn’t optimal. Leipheimer’s route down was the same all day: First Gully to Cron’s and back to the tram – same as Stratford’s 20 years before. Leipheimer was walking right onto the tram – no line. There was a short line at one point, he admitted, but most of the day Leipheimer was skiing Lone Peak with very few others. Maybe today’s the day to beat my personal tram-lap record, he wondered. Thirty-five laps, however, were not in the plans. 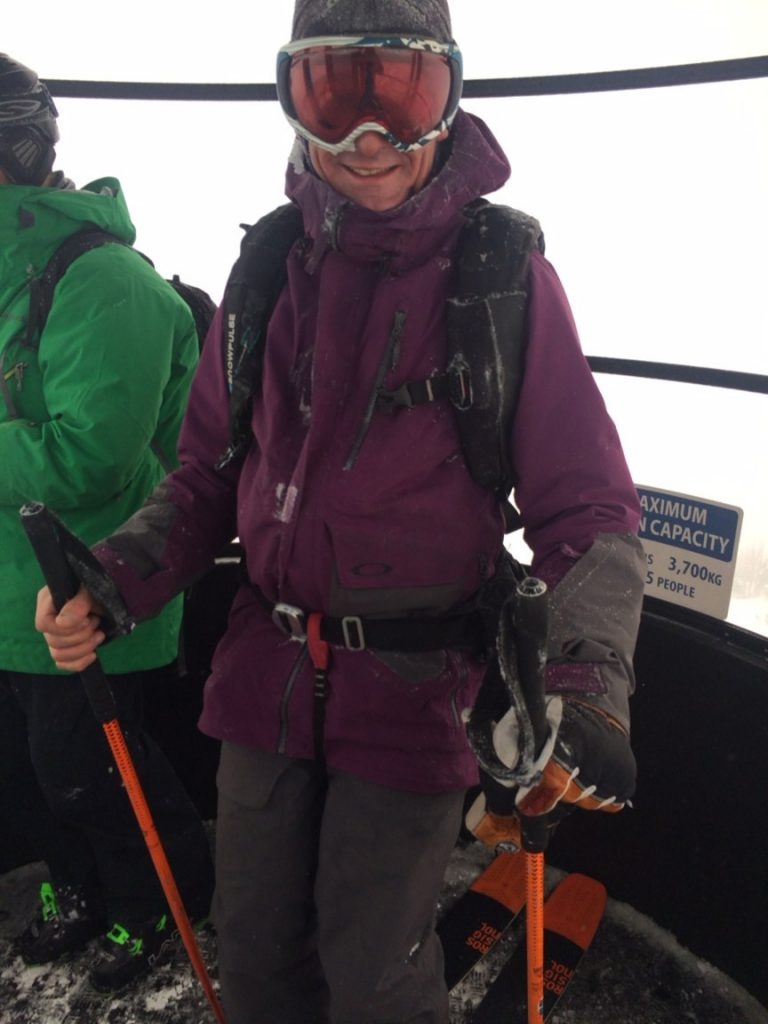 Lone Peak has been skiing great, Leipheimer said. On this day, conditions were chalky and soft.

A Lone Peak Tram ride is, on average, 4 minutes long. Leipheimer was beating down the tramcar he rode up. The tram operators were cheering him on, helping keep track of his run count, he said. Leipheimer never stopped to eat, skiing only on the two cups of coffee he had earlier that morning.

“I feel good that I can achieve such a great goal at my age,” he said. “Skiing is an awesome sport.”

That’s not to say that Leipheimer wasn’t tired the next day. He described his legs as feeling like “Jell-O.” In total, he skied 50,750 feet of vertical, not including the Mr. K run at the end of the day to get back to his vehicle.

“It’s great that Rob got so many in!” said Stratford about a week after Leipheimer text him about his feat. “You need to be fast, able to know our line in zero visibility, and be a little psychotic to repeat ski the same line over and over again. Rob shares the same feeling as me… skiing the Lone Peak Tram is so fun that, if you can, you gotta do it as many times as you possibly can!”