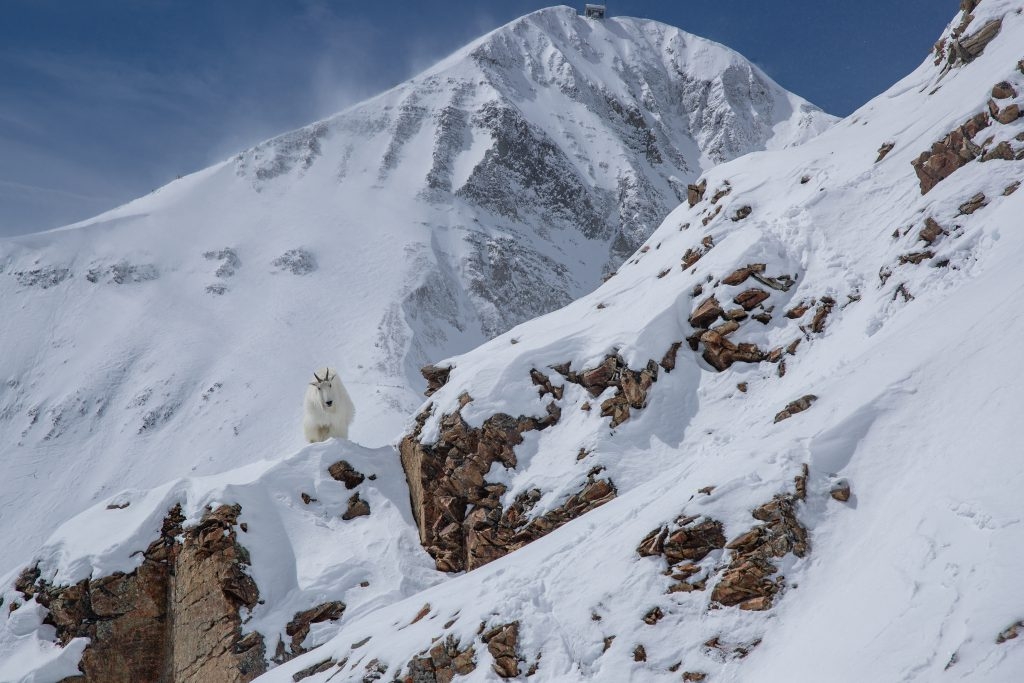 Imagine, for a moment, that you’re riding the Lone Peak Tram. You look down and see figures in the Big Couloir. But instead of skiers, they’re a pair of mountain goats, booting—er, hoofing—straight up the 50-degree slope. The operator opens the tram doors at the top, announcing, “Liberty, Marx, Lenin, and the Dictators are all open for skiing. Sign out for the North Summit Snowfield with ski patrol. The Big Couloir is temporarily closed for goats.”

Yes, that’s right: Big Sky is one of the few ski resorts in the United States where you can see mountain goats while skiing. On occasion, ski patrol even closes terrain and adjusts avalanche control operations to work around the animals, and snow safety director Mike Buotte once counted more than 50 goats grazing in the Bowl in the summer of 2016.

“We do feel fortunate to have the goats around,” Buotte said. “There is a certain kinship that we feel with them, and for some of us, even inspiration. It is sometimes miserable on the mountain with the cold and wind, but when we see the goats, they give some perspective on survival on the mountain.”

With their snow-white coats, wizened faces, and incredible climbing ability, they’re among the most mystical of alpine creatures. They are the largest mammal found in this high-altitude habitat, with adult goats weighing between 150 pounds for females, called nannies, and up to 300 for males, or billies.

Native to the mountains of northwestern North America, mountain goats originally ranged from western Montana and the Columbia River in Washington, north to southeastern Alaska and the southern Yukon. Today, following a history of transplants by government agencies, their modern range is much broader and includes many mountain ranges across Montana, including the Madison Range north and south of Big Sky, as well as Lone Mountain, home to the resort.

As of 2014, there were 2,355 known mountain goats living in the Greater Yellowstone Ecosystem, and according to Fish, Wildlife and Parks wildlife biologist Julie Cunningham, a 2019 aerial survey found 335 goats across five survey locations here in the Madison Range.

While the goats have thrived in and around Big Sky, their story is a complex one.

HOW DID THEY GET HERE? 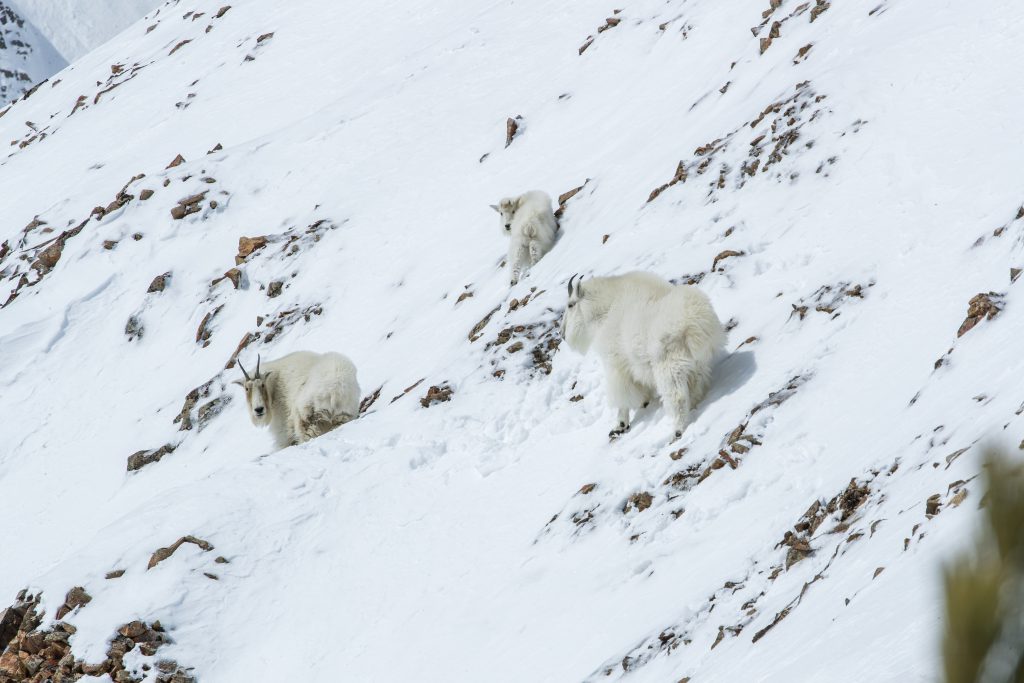 Montana Fish, Wildlife and Parks introduced 58 goats to several locations in the Madisons near Big Sky in 1947, 1950, and 1951. The transplants were part of a larger effort to increase both mountain goat populations, as well as statewide wildlife numbers for hunting. In total, the agency transplanted 495 animals to 27 different sites in Montana between 1941 and 2008, with some ranges receiving multiple introductions.

WHERE DO MOUNTAIN GOATS LIVE? 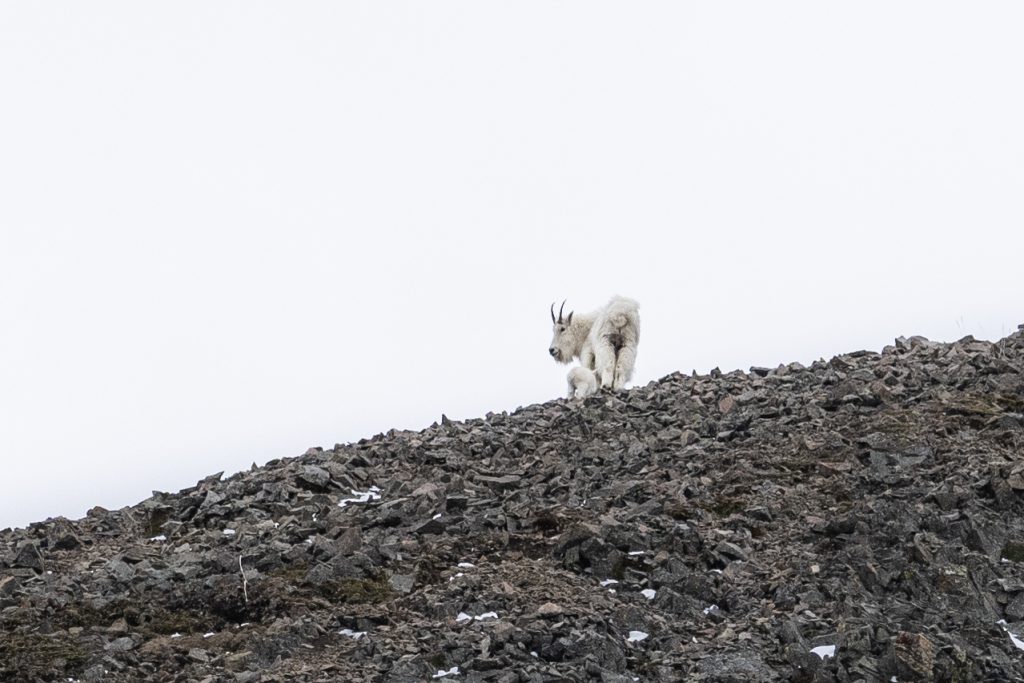 Mountain goats are habitat specialists, meaning they persist under extreme environmental conditions. In winter, they tend to occupy steep, south-facing slopes and windblown ridgetops, although they can be seen on all aspects of Lone Mountain, from the Yeti Traverse to the West Wall and the Headwaters. Due to the difficulty of traveling through deep snow and the reduced ability to forage, they’re relatively immobile during this time of year.

In spring, some herds migrate to lower altitudes in search of grasses and shrubs to browse. While no research has been conducted specifically on the animals on Lone Mountain, you can see animals on the peak year round, so it’s likely that some of them don’t migrate very far.

Female goats give birth from mid-May to early June, during the kidding period. During this time, protective tree cover is valuable to nursery herds, as newborn goats are vulnerable to marauding birds of prey such as the golden eagle.
Come summer, they can be seen grazing in meadows and forests, congregating around deposits of mineral-enriched water or soil known as mineral licks, or on the south and west-facing cliffs. At Big Sky, look for them on the A-Z Chutes and the Pinnacles.

HOW DO MOUNTAIN GOATS SURVIVE WINTER AT 11,000 FEET?

In Big Sky and the surrounding Madison Range, it’s not uncommon to see mountain goats above 10,000 and even 11,000 feet, and elsewhere, the animals live as high as 13,000 feet. They owe their ability to occupy extreme elevations to their incredible climbing skill, which also allows them to access the meager nutritional resources like lichen, moss, and conifers that keep them alive, said Jesse DeVoe, a wildlife research technician for FWP.

A short, stocky stature combined with powerful neck and shoulder muscles help goats propel themselves up extremely steep inclines, sometimes at angles over 60 degrees. The hard exterior of their hooves protects against wear and tear, and a soft, malleable interior helps them grip rocks as they scale treacherous terrain. Their hooves’ cloven shape allows them to spread apart, also improving grip, and the tips of their feet have sharp dewclaws that help prevent slipping.
Goats’ iconic wool coats are colored white to blend in with their snowy surroundings, while their long hair forms a beard under the chin and pantaloons around the front legs, which insulate them against frigid temperatures and high winds. In spring, following kidding, adults shed their coats by rubbing against rocks and trees. In the Big Sky area, look for their fur left behind on brush and rocks, and keep an eye out for them below tree line in spring. If you see them in this stage, they look disheveled, as if they’re midway through taking off their winter clothes.

WHAT DOES THE FUTURE LOOK LIKE FOR MOUNTAIN GOATS? 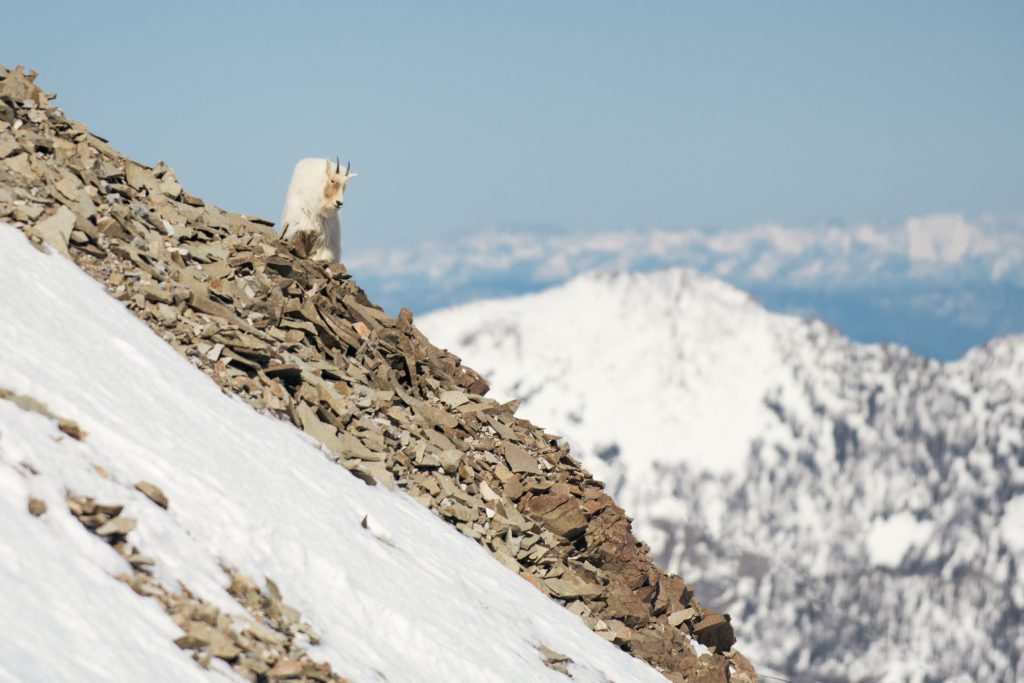 Some conservationists have raised concerns about the effects of mountain goat presence on native bighorn sheep populations, which have suffered declines across most of their range due to habitat loss, disease, and unregulated hunting in the 19th and 20th centuries.

While the two do share similar food and habitat and both are vulnerable to respiratory disease contracted from domestic stock, encounters between them are rarely aggressive.

“To my knowledge, there are no studies that have shown that disease transfer from goats is the main contributor to bighorn declines,” said DeVoe, the FWP wildlife research technician. “That said, disease transfer from goats is a concern of wildlife managers. It is among one of many often interacting factors that have the potential to lead to declines in bighorn populations.”But mountain goats, too, are playing against the odds. According to the National Park Service, because goats rely on cool temperatures and accessible alpine habitats, they’re particularly vulnerable to habitat alterations caused by climate change. As the mountain goat population continues to grow, new questions about managing and conserving this fascinating species will surely arise.

WHAT TO DO IF YOU SEE A GOAT 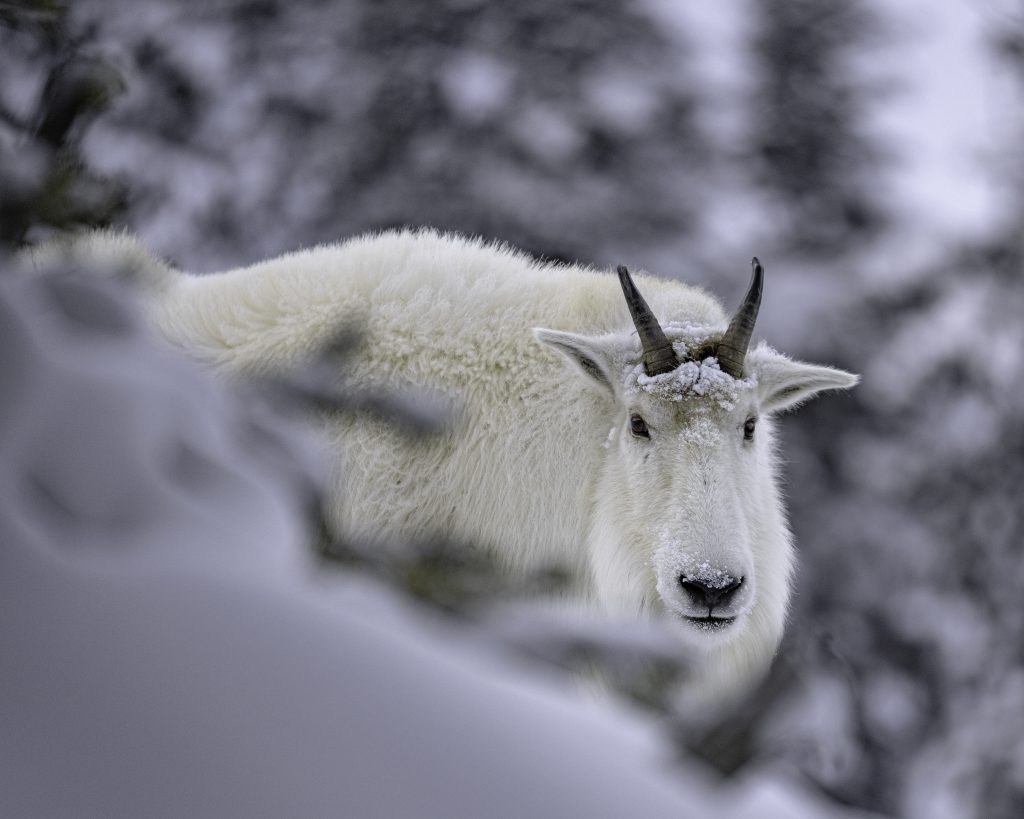 While goats have thrived in and around Big Sky, human disturbance may reduce the goats’ ability to forage, increase their energetic expenditure, and displace them from important habitats during critical periods such as breeding and kidding seasons. Because they have only one kid a year, on average, herds grow slowly.

This means you should never approach an animal if you encounter one while skiing or hiking.

“It’s really important that people know to give them space, even though they can seem pretty docile and [like they don’t care] about humans,” said DeVoe, noting that it’s crucial not to feed them, because although goats are rarely dangerous, they can become aggressive when frightened or provoked.

Those that have grown accustomed to human presence—especially those that have been fed—are more likely to “stand their ground” in the presence of people, while others will charge humans to defend themselves.The U.S. Forest Service recommends staying at least 50 yards away from wild mountain goats, and slowly moving away if an animal approaches. If it persists, ward it off by shouting and waving your arms.

Ellyn Lapointe graduated from the University of Vermont in 2020 with degrees in writing and environmental science. Now based in New York City, she is a science journalism master's student at NYU with a passion for writing about conservation and climate change.