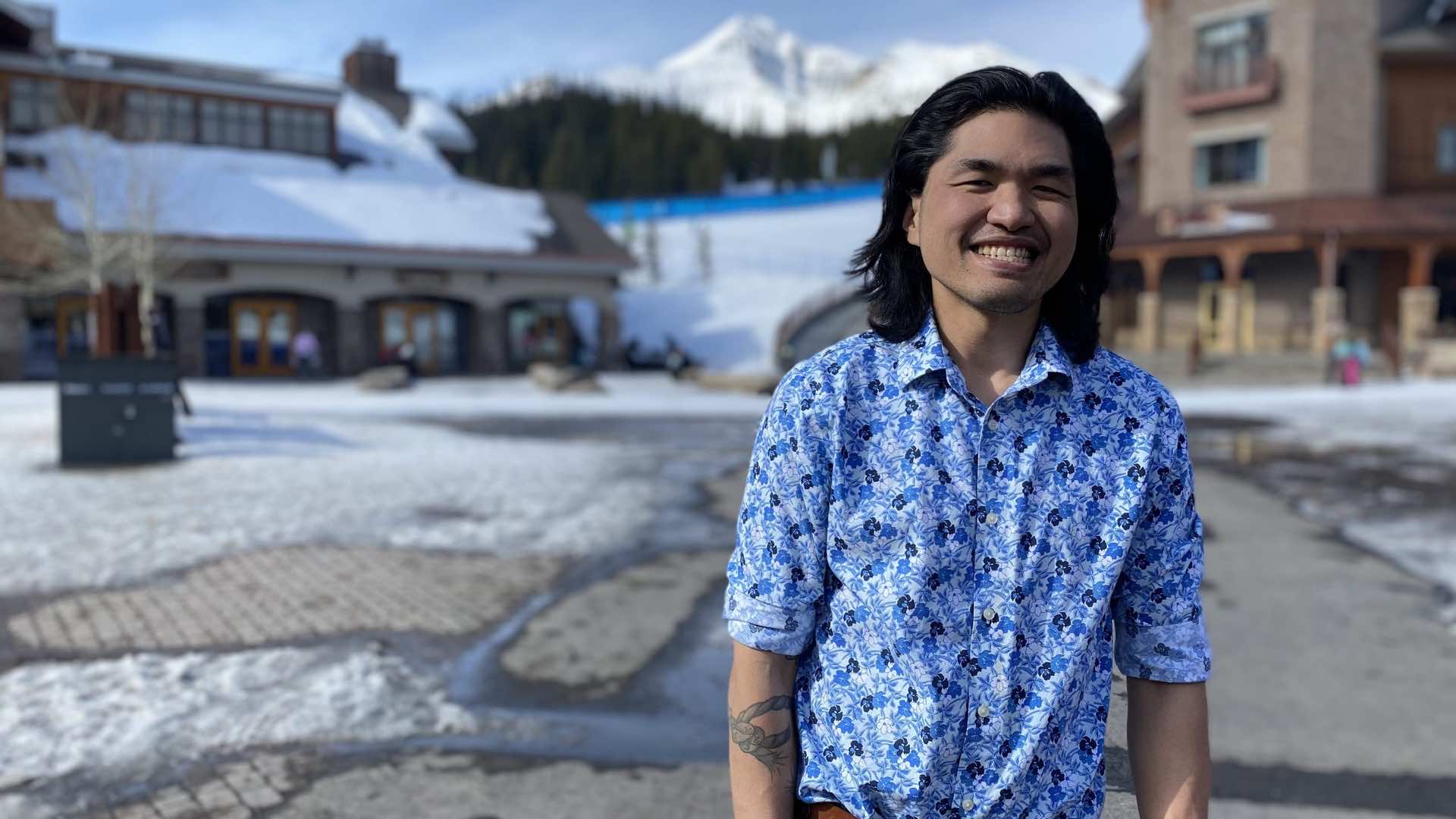 Stuart Fuke combines his Hawaiian upbringing and military background to create family in the kitchen.

Directly below the giant bear statue in the Huntley lobby, there’s a place you’ve probably never even imagined was there. An elevator, tucked into a corner of the lobby, is almost like a trap door into this other realm. The banquet kitchen.

The energy is humming in this efficient world of spatulas, mixing bowls, knives, cutting boards and roasting pans on Sunday afternoon, as cooks put the finishing touches on the night’s buffet, which will serve 275.

Nigel Griffiths, the lead cook, is slicing roasted red peppers for salsa, while line cook Andy Whitely spoons olive tapenade onto toast for bruschetta. They’re focused, but talk and laugh as they work.

“You can use chipotle in salsa, sour cream, or even marinated chipotle steak,” Fuke explains to Jeff Avery, the sous chef, and Eliana Turpo, a culinary student from Peru. “To add a different flavor and make it more Mexican, we could add cilantro.” 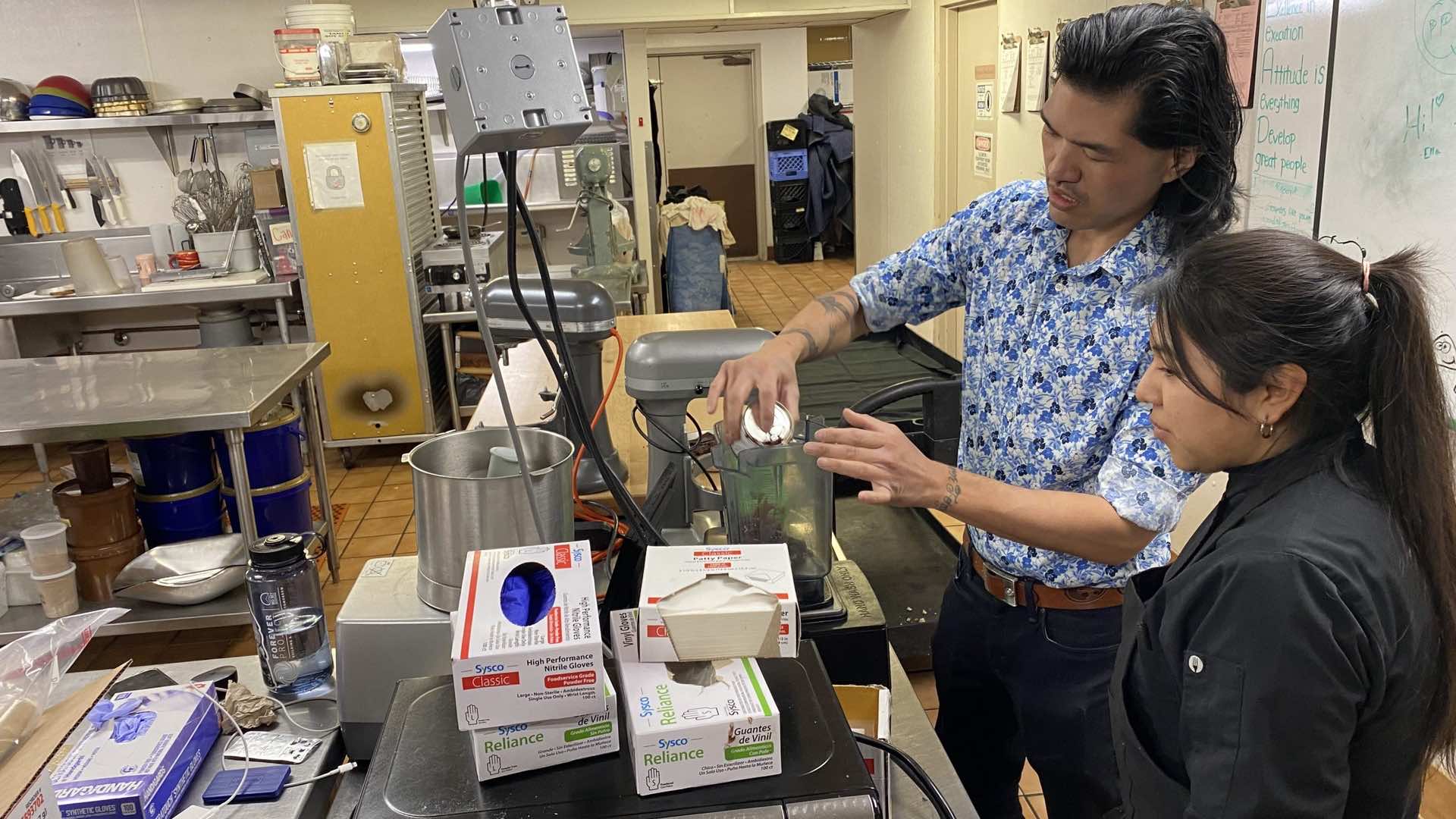 Fuke, 33, has been the resort’s banquet manager since March of 2020, and during that time he’s found the ingredients for teamwork: Be welcoming, encourage learning and creativity, lead with respect, and always have each other’s backs.

“I hire for attitude, for personality,” he said. “I want people that want to be here and want to have fun. You can always teach cooking experience and develop work ethic. If you work hard as a manager, they’ll work hard for you.”

Fuke grew up on Oahu and served as a Navy medic with marines deployed in Afghanistan, where he was wounded in battle. After his service, he earned a degree in hospitality, taking culinary classes along the way, and then worked as a chef in California. Fuke infuses traditional Hawaiian culture’s emphasis on family together with military precision, and experience working for a supportive chef into the banquet team. 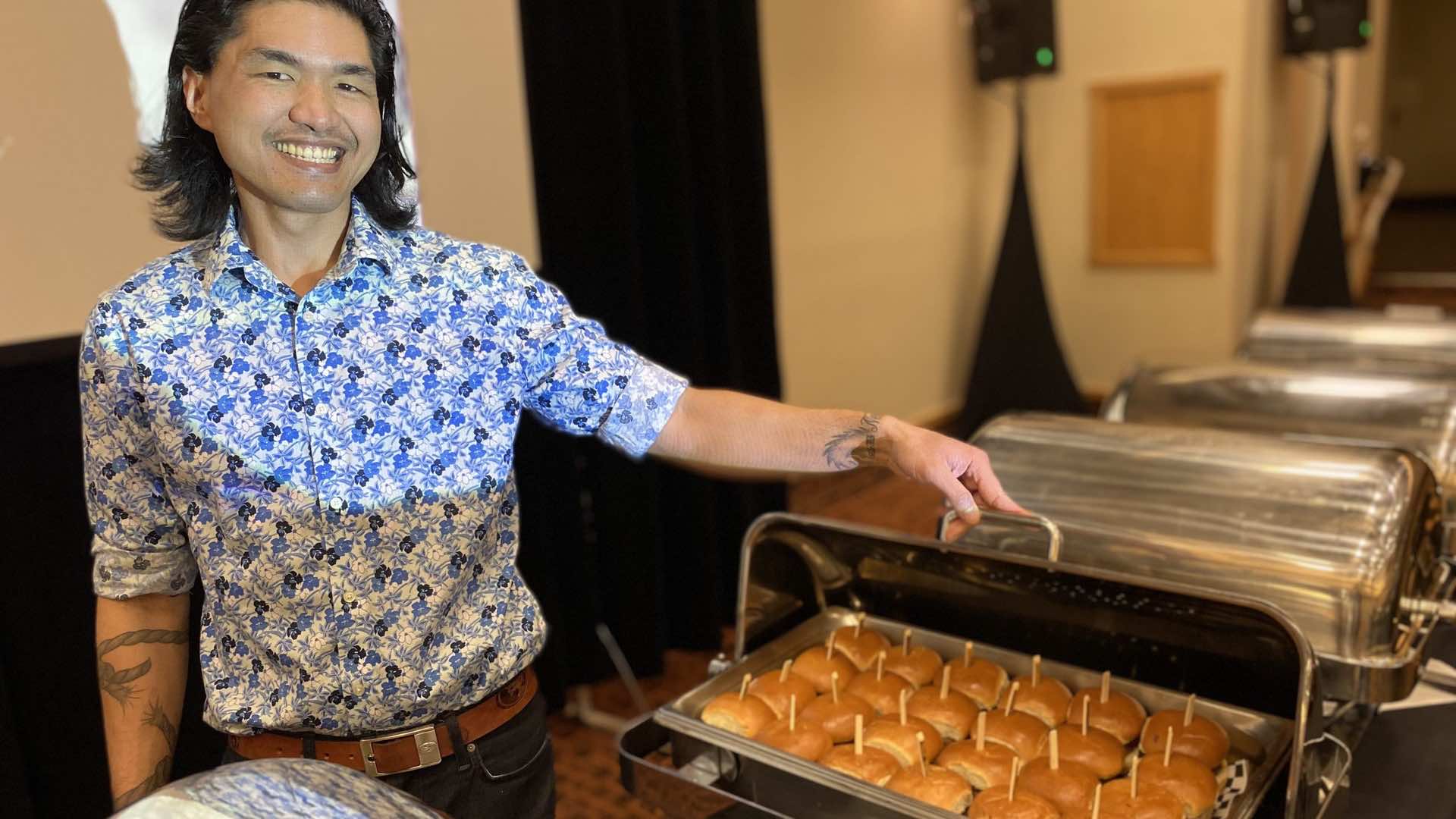 It’s a tight group, and a lot of credit goes to Fuke for that, according to his boss Rachel Stewart, the director of conference services.

“He puts in what he wants to get out of something,” said Stewart, “and he really wants that culture and love from his team and for people to feel the same support and culture and love he’s felt at his past jobs, and so he does everything to perpetuate that.”

Through another doorway, servers are lining up buffet labels and breezing through the curtains separating the kitchen from the Missouri Ballroom, setting up for when guests arrive at 5 p.m. At the buffet table, Fuke is coaching Avery, the sous chef, on what to look for in terms of presentation. They review the bison wontons, the waffle fries, and the fruit platter, while Kevin Smith, the resort’s other banquet manager, lines cans of Montana microbrews on ice. Just as Smith walks back through the curtains, a guest walks in and heads for the bar. Fuke meets him there.

“May I help you, sir?” he asks, then finds an IPA and a pilsener for the guest and his wife.

Fuke’s phone pings. It’s a text on the thread he, Smith, and Stewart share with the event group leader and the resort’s conference managers, responding 24-7.

Over the course of the evening, people from various departments appear in search of items—the Chet’s sous chef seeking dark melting chocolate to ice red velvet cakes, a vest-clad bellman for a guest’s package—and they always turn to Fuke, who’s always on point. 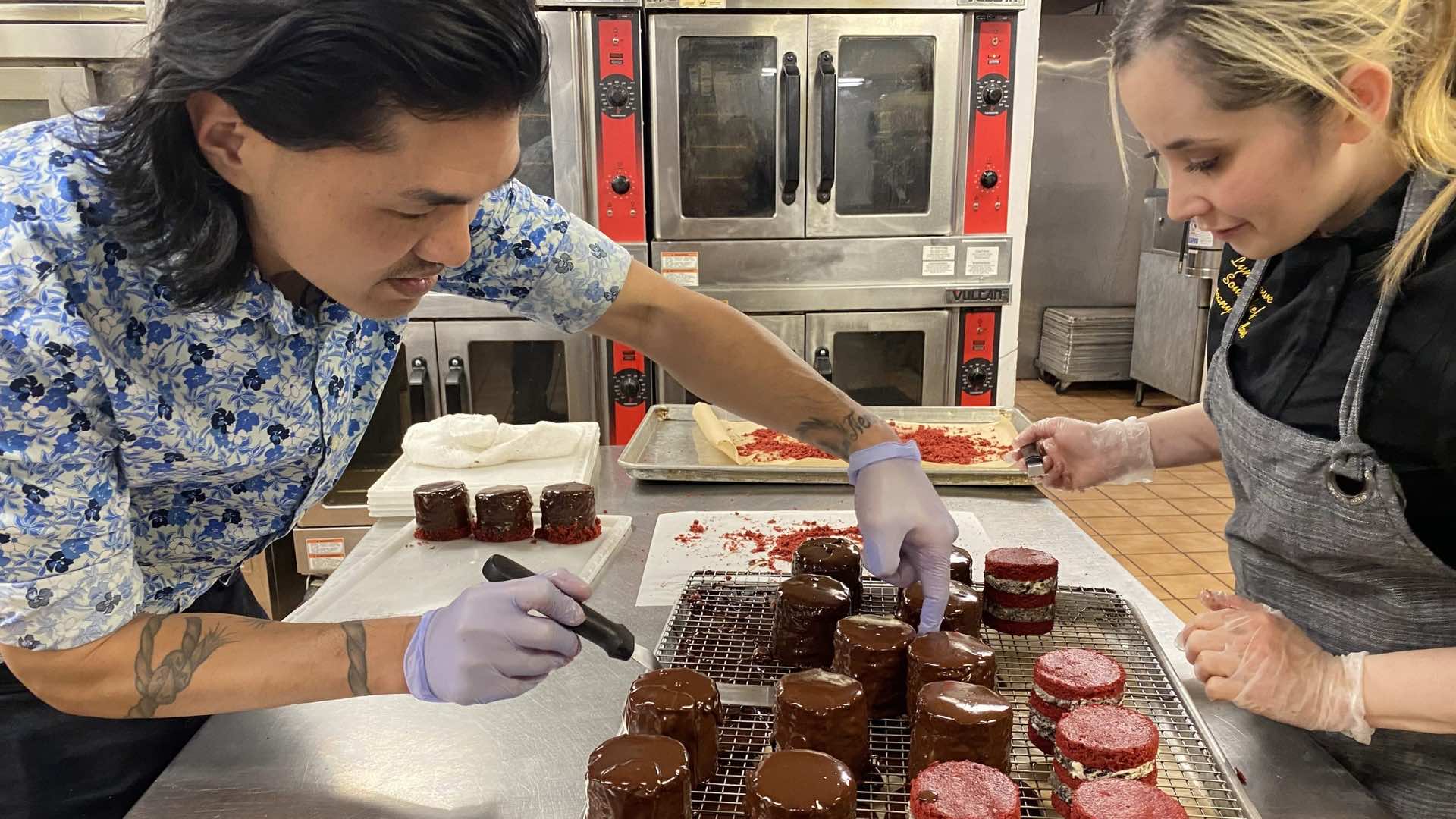 “The hardest part is trying to be everywhere at once,” Fuke said. “I always loved helping people and serving them. It was something I signed up to do—to make everyone happy.”

Fuke’s not the only one on this track. His first winter, he was in the kitchen talking with Stewart when ski patrol began doing their initial avalanche mitigation routes of the season. Stewart’s brother is in the Marine Corps, so when she saw Fuke jump at the sound of the explosives, she knew the noise had caused a flashback to the battlefield. After making sure he was OK, Stewart reached out to patrol to problem solve. Now Fuke has access to a report from patrol alerting him if control work is likely, so he can prepare himself.

Afterwards, Stewart sat Fuke down to learn how she could help.

“She was like, ‘OK, I want to know every trigger you have, so I’m aware and we can help you out and work with you,” Fuke said. “I have never had anything close to support like that.”

On his second tour of duty, Fuke ran a battalion aid station where he cared for a group of 25 Marines, patrolling every day with them. On good days, he nursed headaches and scratches, and on the worst, he experienced the raw horror of war. In one skirmish, a friend died in his arms.

Fuke was wounded in one of the highest casualty battles in Afghanistan, when a bullet from stray sniper fire went through his hip, hitting his femoral artery and sciatic nerve. In honor of his sacrifice, he received a Purple Heart award in 2011. His foot is now semi-paralyzed, and he wears a brace from his knee to his ankle. His pain is a constant “tearing and burning,” although you’d never know it from the way he moves nimbly around the kitchen.

“I spent a lot of time trying to hide it, because it affected me a lot through my life, so I had to tell myself how to deal with it,” Fuke said.

Therapy and an anti-inflammatory diet help, as does support from coworkers, especially Stewart and Danica Faussett, manager of the coffee shop in the Huntley Lobby.

“They’re like a family to me,” he said. “To have strangers who turned into friends who turned into family—to have them always watching out and trying to understand. … I’ve never met anyone in my whole time being injured or dealing with PTSD that got me back on track like those two.”

Fuke is open about his challenges, using his own vulnerability as a way to relate to others who are going through something hard, themselves. Ever the caretaker, he’s willing to lend a hand or a listening ear, and he’s always working to bring the team together.

In Fuke’s words: “It’s always been a passion to make sure people are good.”