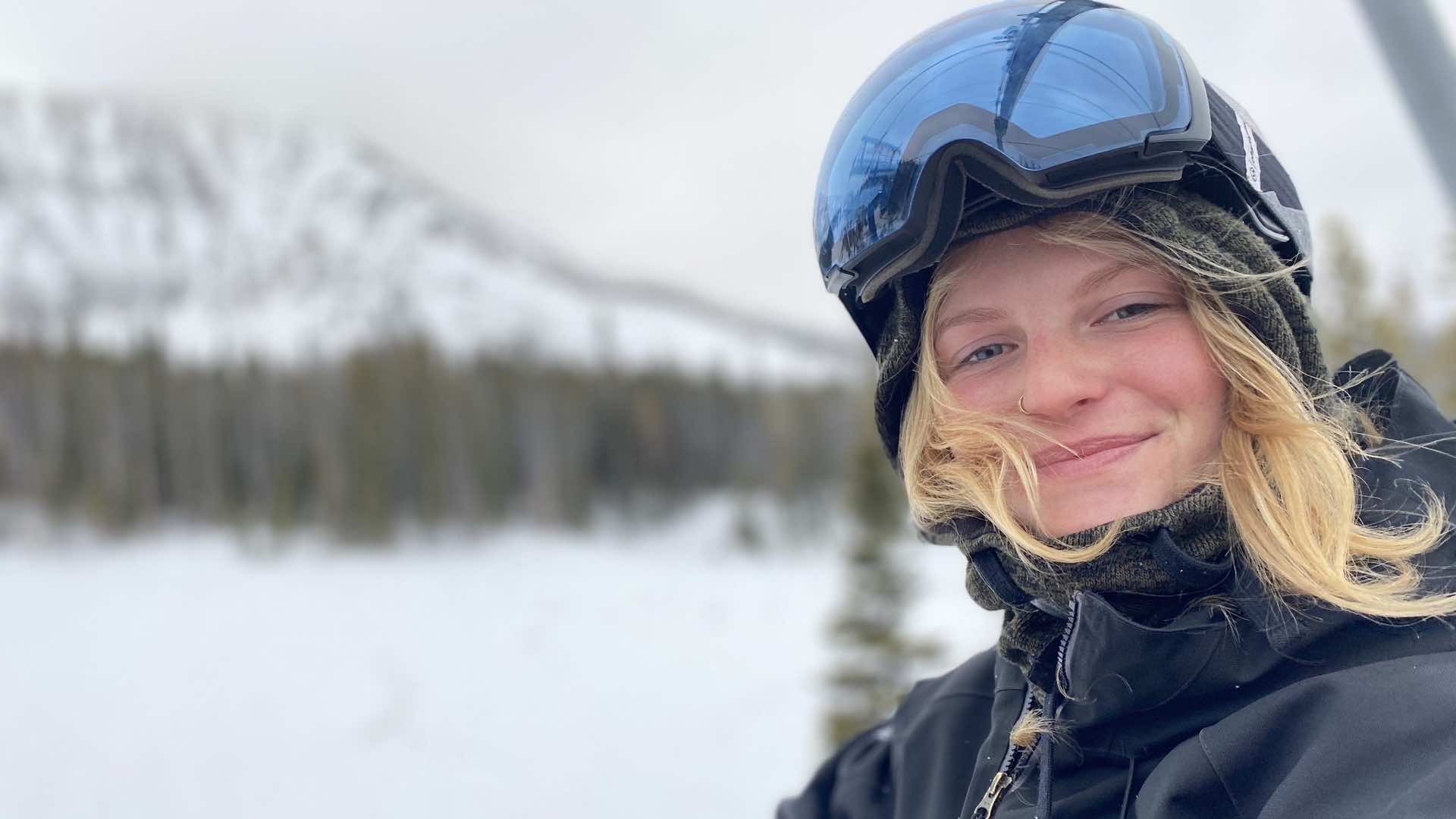 The Liftie and the Sawyer

Whether she’s running a chairlift or a chainsaw, Kassi Jaskolski is always smiling

It’s 3 p.m. at the top of the Six Shooter Chairlift, and Kassi Jaskolski is hustling. Hustling is pretty much Jaskolski’s M.O.

Right now, the lift operator is shoveling piles of snow onto the chair’s off-ramp, breaking up the chunks with a rake, and smoothing it out between chairs.

“Have a great day!” she says to each group of skiers unloading, flashing a huge smile. The wind whips her blond hair, and her helmet cocks forward onto her forehead. 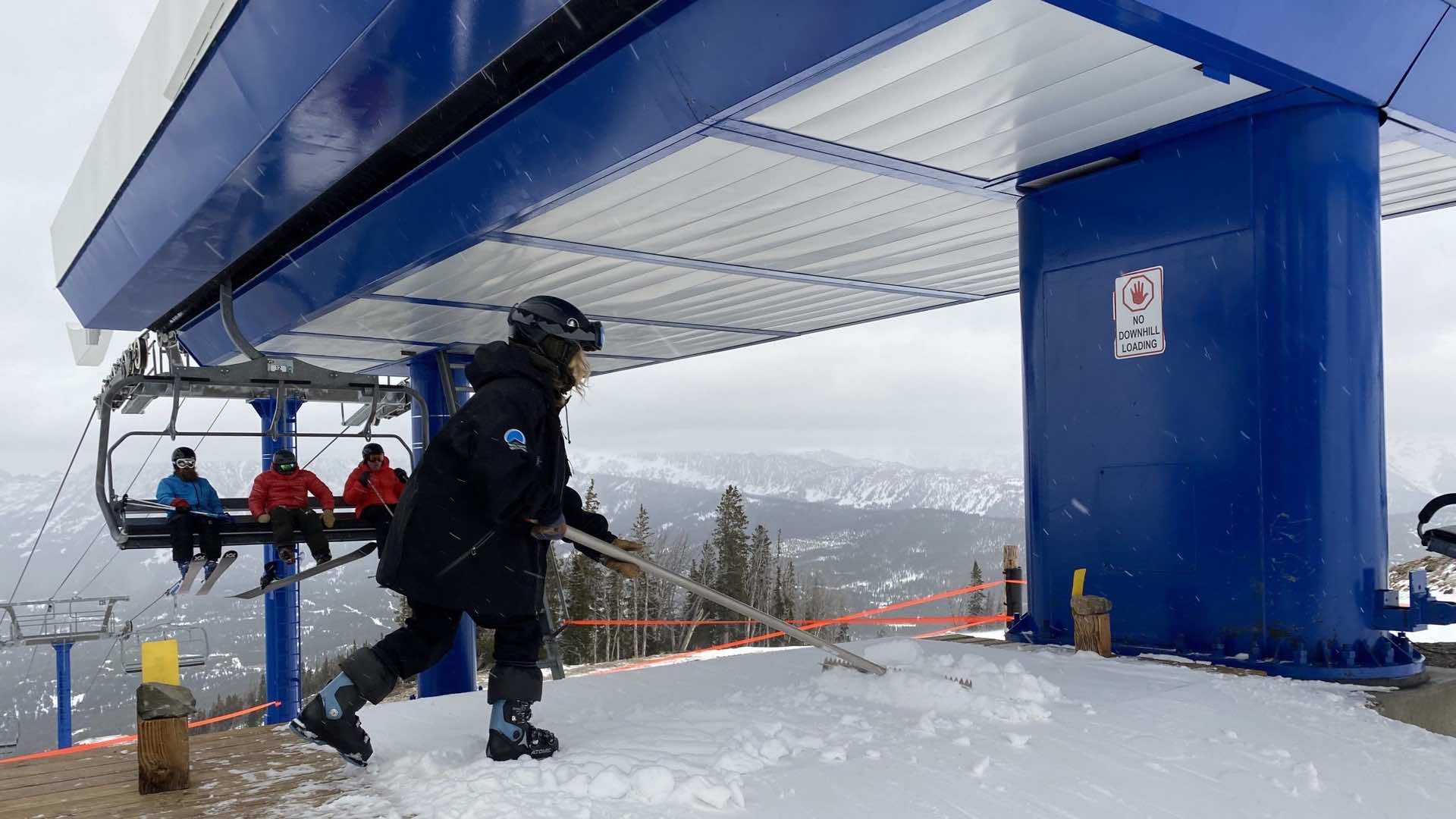 Originally from Dudley, Massachusetts, the 23-year-old earned an environmental science degree from Franklin Pierce University in New Hampshire in May of 2020, drove west that September, and landed a job as a lift operator in Big Sky. After that first winter season ended, she spent a month kicking around southern Utah with friends, and in late May started work on the summer trail crew, doing ski trail maintenance with a chainsaw.

Her winter job entails showing up at 6:30 or 7 a.m. (Jaskolski likes to get there at 6:30 alongside the supervisors), attending a morning meeting, then driving to the north side and commuting on skis to the base of the Six Shooter. The lift operators, lovingly referred to as “lifties,” are responsible for getting the lift and ramps ready for the day, which this morning for Jaskolski meant completely refilling the bottom ramp with snow, and then stamping it down with her skis.

During the day, she’s raking, shoveling, greeting guests, and watching carefully as people load or unload the lift. If someone falls while loading, she leaps to hit either the slow or stop button. There are rope lines, safety checklists and stop logs to be maintained. 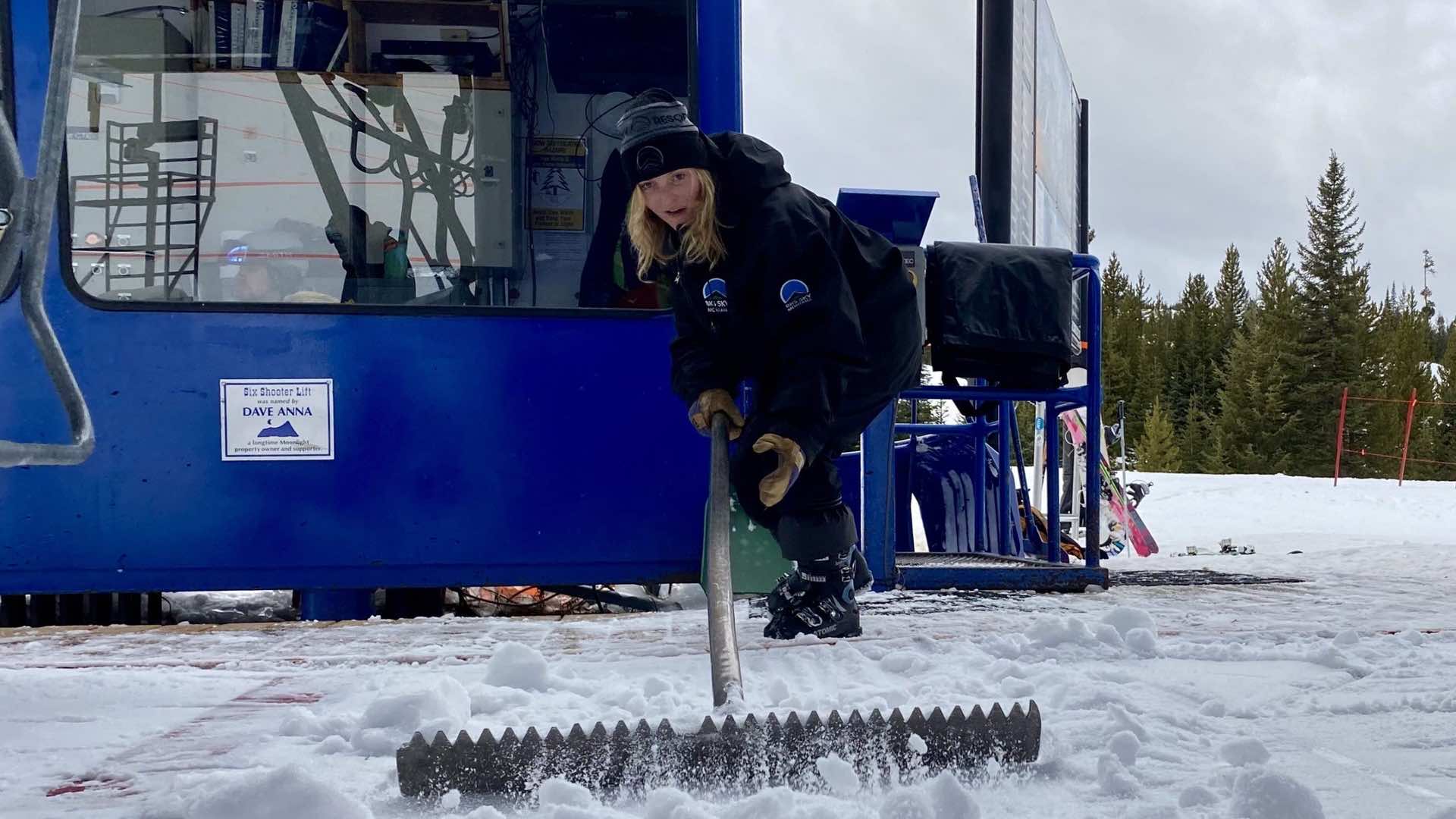 “I do like working with machinery,” she said, pointing out that she’s in fact operating this giant chairlift. “I think it’s really interesting. But also, you’re there with the skiers that come through every day, so you get to build relationships with the locals. And I’m not going to lie, we ski a lot for work.”

Occasionally, a friendly skier will treat them with Uncle Dan’s cookies, or shout, “We love our lifties!” but the 10-hour days can go by slowly if you don’t stay busy.

Jaskolski’s positivity energizes others around her, said Connor Smith, who’s the lead on Sixer and Lone Tree lifts. “Kassi is a ray of sunshine on the Moonlight side,” he said.

“Especially at the top, she doesn’t just sit there and watch people go by. She’s always waving. … It takes a special kind of person to say ‘hi’ to everyone and be enthusiastic, plus be able to do all this snow work, and just stay on top of it.” 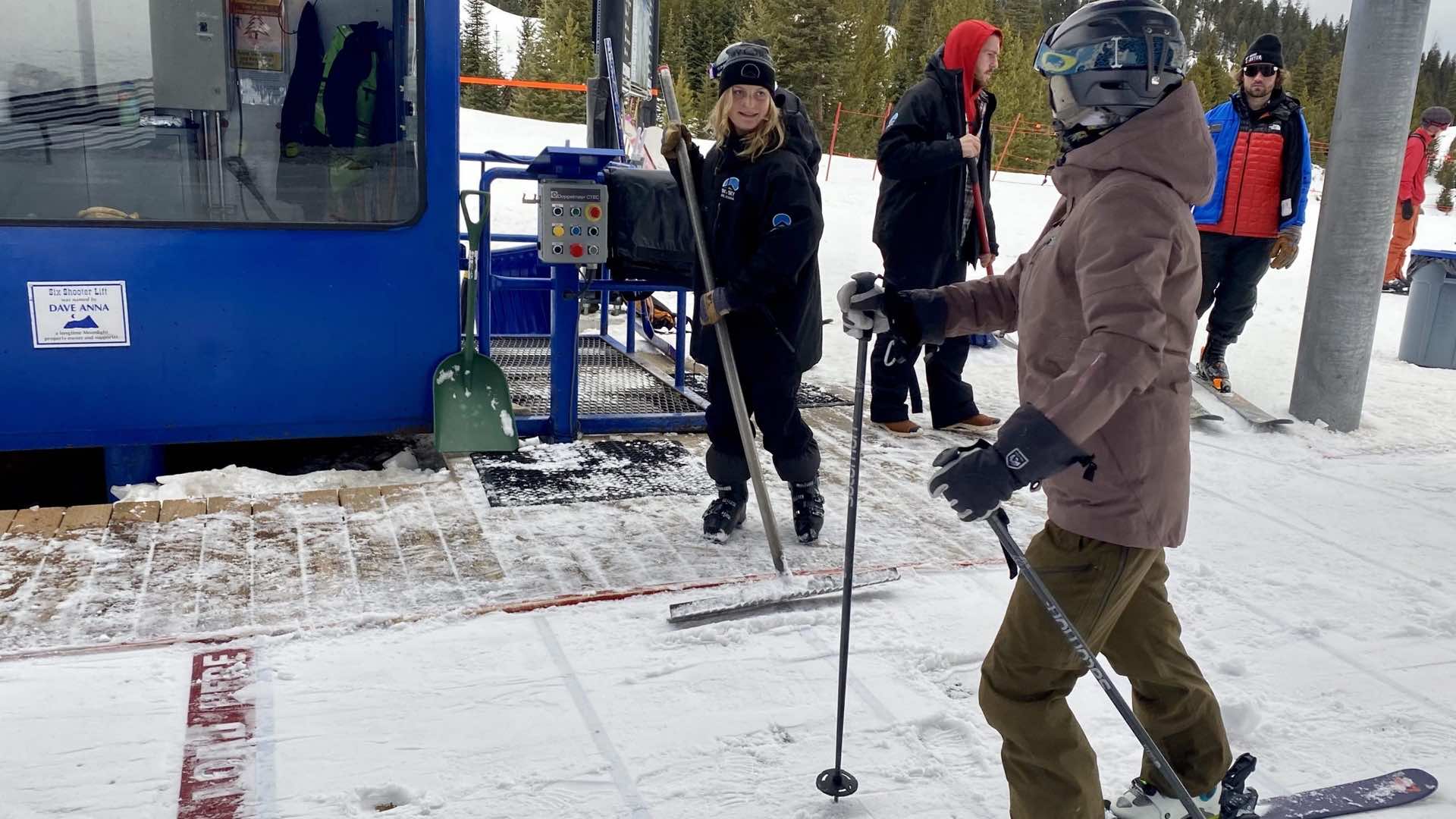 Jaskolski puts the rake away, checks in with the top shack operator, Heather Kunz, and then clicks into her skis, headed for a pair of glades she worked on this past summer, Jaws and Community Matters.

She wears an oversized jacket and doesn’t carry poles, but she’s not a park rat. In fact, a few days ago, she skied the Big Couloir without poles. It’s just how she’s always done it, ever since dropping one off the lift on her first day of skiing at age 15 at Wachusett Mountain, in Massachusetts.

“My friend took the other one and threw it and was like, ‘you’re learning without.’”

While she loves skiing on the job and enjoys the fast pace of winter, Jaskolski said summer saw crew was more rewarding. In addition to felling “leaners” and standing dead trees, the crew thinned gladed runs and removed saplings on more than 30 groomers, which entailed hiking uphill with a chainsaw and “mowing” down new growth. The resort maintains gladed runs as saplings grow up, so the trails don’t disappear, and clears fallen and standing dead trees for wildfire mitigation.

The only woman on the 8-person crew, Jaskolski loved everything about it.

“You’re in the woods the whole time, and you don’t see anyone besides the crew. It’s just you and the trees and a lot of solitude. I liked seeing how much work we did, day-to-day, and coming back to the shop at the end of the day tired.”

As you might expect, after a summer of hot, dusty 10-hour days, Jaskolski’s crewmates have a trove of stories about her.

One involves her running from a large tree she was attempting to drop that didn’t go quite as planned, yelling as she ran. In the end, Jaskolski got the tree on the ground with the help of a crewmate, something her saw crew boss Kyle Achenbach said is telling about her nature.

“Safely felling a tree after it seems it already has tried to kill you takes a lot of courage,” Achenbach said, noting Jaskolski’s positive attitude, drivenness, and ability to learn.

While a percentage of the resort’s workers stick around for years, if not decades, many are transient, like Jaskolski, and spend a year, two, or five working on the mountain before moving on. Achenbach, who is the resort’s lead plow operator and previously worked for an environmental consulting firm, said that having new faces every year is actually a good thing.

“Everyone initially comes in with a fresh attitude and is super excited. It’s a change to the standard way of living—of running through a career with the same people or the same job. Everybody is super positive, doing something new, trying something new.” 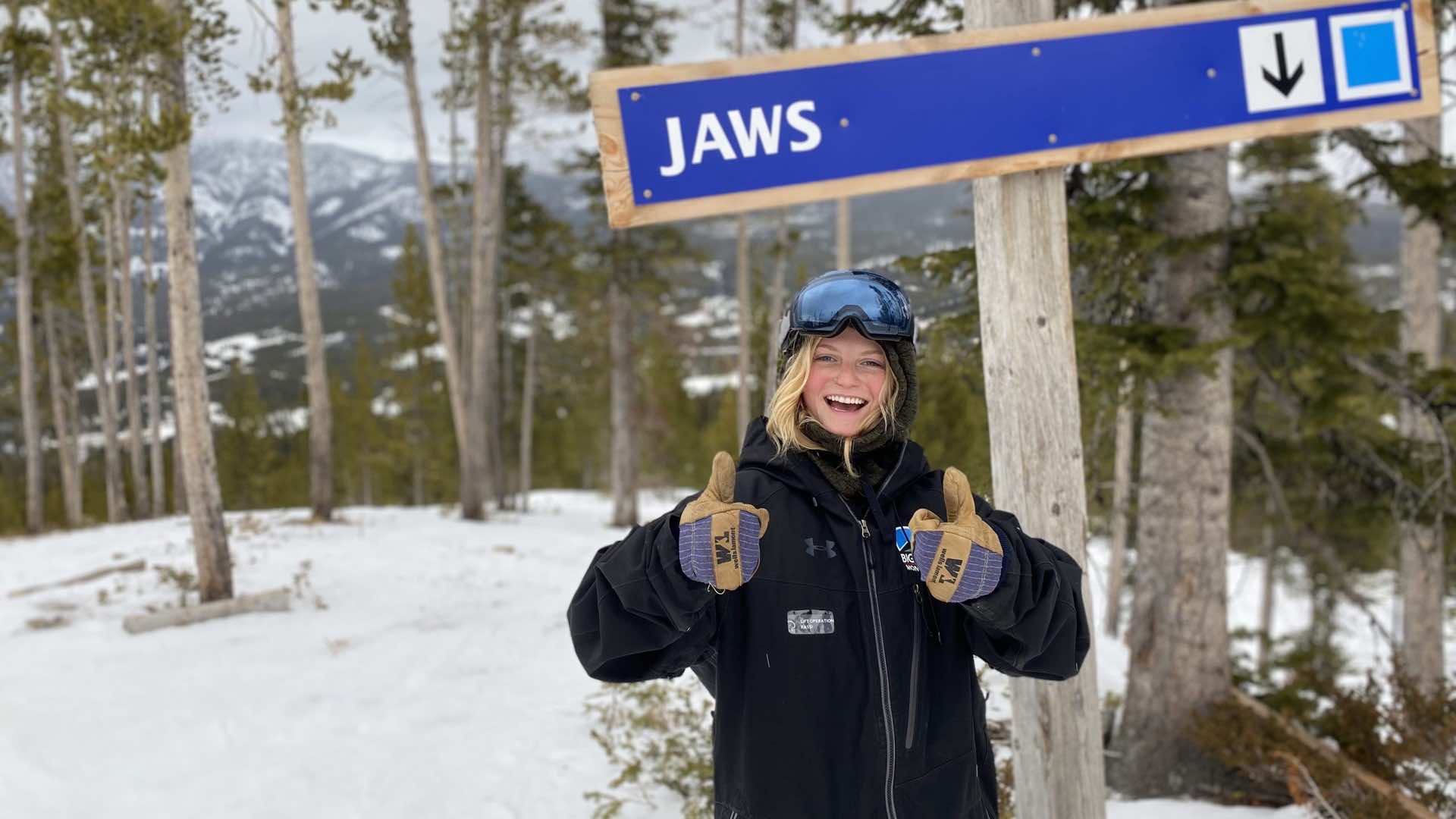 Now, dropping into Jaws, she skis like she’s been on snow daily for the last 70 days—which for the most part she has. She’s relaxed as she slides around the moguls, moving with creativity and ease through the trees.

She hits the cat track and slides over to Community Matters, which she first skied last year with a friend. At the time, it was kind of a bobsled course between logs and stumps, but since she and the crew thinned it last summer, it flows.

At the bottom, she looks back uphill, smiling.

Because as Jaskolski herself says, “once you stop smiling, you’re not smiling anymore.”