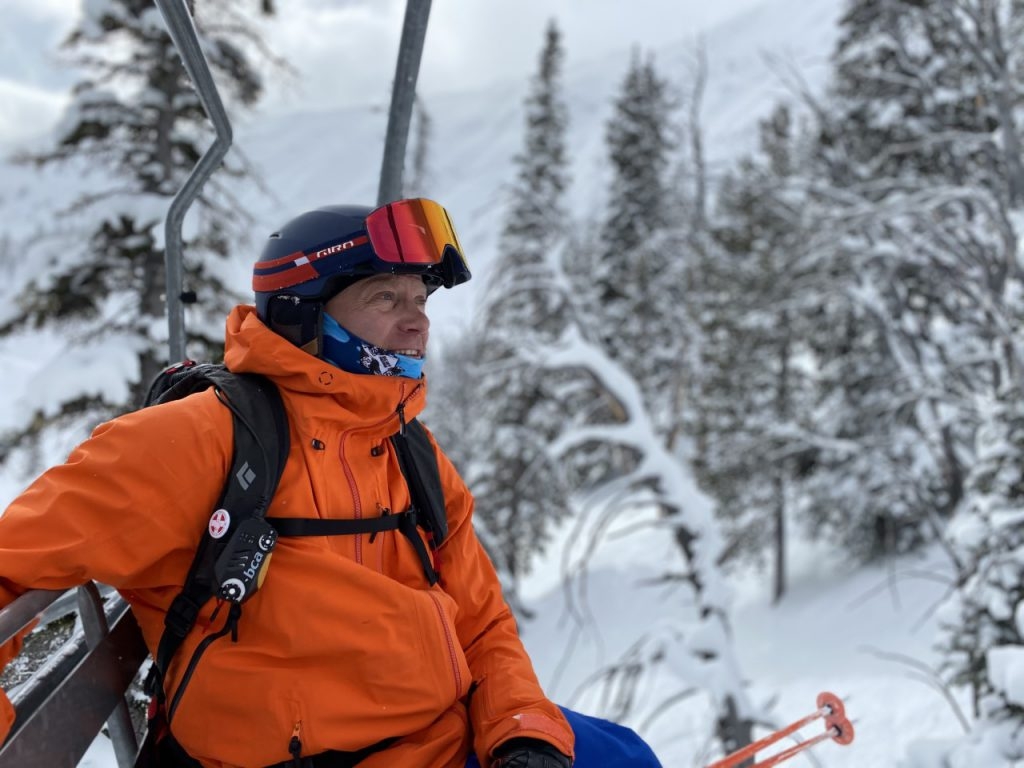 Dave Stergar was nearing the front of the Tram line when a friend leaned over the fence and cupped his hands to whisper.

“Patrol is about to open the North Summit Snowfield,” he said.

Stergar’s blue eyes lit with excitement. If the whisper was true, it would be the first day the Snowfield opened to the public that year. And while the morning snow report posted 1-2 inches, Stergar had already skied two fluffy laps in the Headwaters, so he knew there was more in the alpine and the wind had favored the northerly aspects.

Not 15 minutes later, I trailed Stergar as he knocked on the summit shack and signed out with patrol. We hustled over to click into our skis, slid through the gate, and traversed to the lip of the Snowfield. The third public party to ski the Snowfield all season, we found at least a foot of new snow—light enough you skied right through it, but supportive and soft.

Known to friends as “Stergy,” Stergar, 54, grew up in Anaconda, Montana, and has skied at Big Sky Resort for more than 30 years. As a boy, he strapped leather lace-up boots to wooden skis to ski tiny Wraith Hill, a ski hill with a rope tow that’s no longer operating near his hometown. Later, when Discovery Ski Area opened in the winter of 1974/75, he got a pass there, too, and with his family, visited other areas around the state including Big Sky. Eventually, Stergar got a job as a night bellman at the Huntley Lodge. That season, 1992/93, he skied 100-plus days.

“That really hooked me on Big Sky,” said Stergar, who spent the next 27 years teaching seventh-grade science in Helena—and almost every weekend in Big Sky. He worked as an ambassador for the resort for over a decade, bought a condo here in 2010, and once skied 26 Tram laps in a single day. He got married at age 40 and taught his wife to ski here.

A sort-of unofficial mayor figure, Stergar seems to know everyone on the mountain—and if he hasn’t met you yet, he’ll make sure he does by the time you’re through the Tram line. But if you chase him around the mountain, he’ll probably outski or out-hike you without even trying.

“Big Sky is the most European-type skiing I’ve seen outside of Europe,” he said. “If you like the big wide open above tree line skiing, this is it. Our Tram accesses a massive amount of terrain.”

And then there’s the weather, which does crazy things on Lone Mountain. Sometimes, if you’re in the right place at the right time, they’re crazy good.

One such day, two inches of fresh snow blanketed the Mountain Village picnic tables when Stergar walked through the base area in the morning. After he rode the Tram and dropped in, he found the wind had blown snow from the northwest side of the mountain onto the South Face, and it was literally chest-deep in Marx.

“Picture the face shot up and over the shoulders,” Stergar recalls after our run down the Snowfield—which, while not chest deep, held the kind of aerated, boot-top alpine delicacy I’ve skied only on Lone Mountain.

Stergar loves skiing 3,000 vert in one shot, ripping five-minute laps in the Bowl, and slicing into fresh corduroy on Andesite. He loves when the wind buffs his tracks pool-table smooth between runs, and when the sky is so clear you can see the Tetons from the summit. He loves riding the new heated bubble chairs, pounding 3:45 p.m. leg-burner Snake Pit moguls, and gazing at the peak over après beers from the Vista Bar deck at the Exchange in anticipation of being in the right spot in the alpine at the right time again tomorrow.