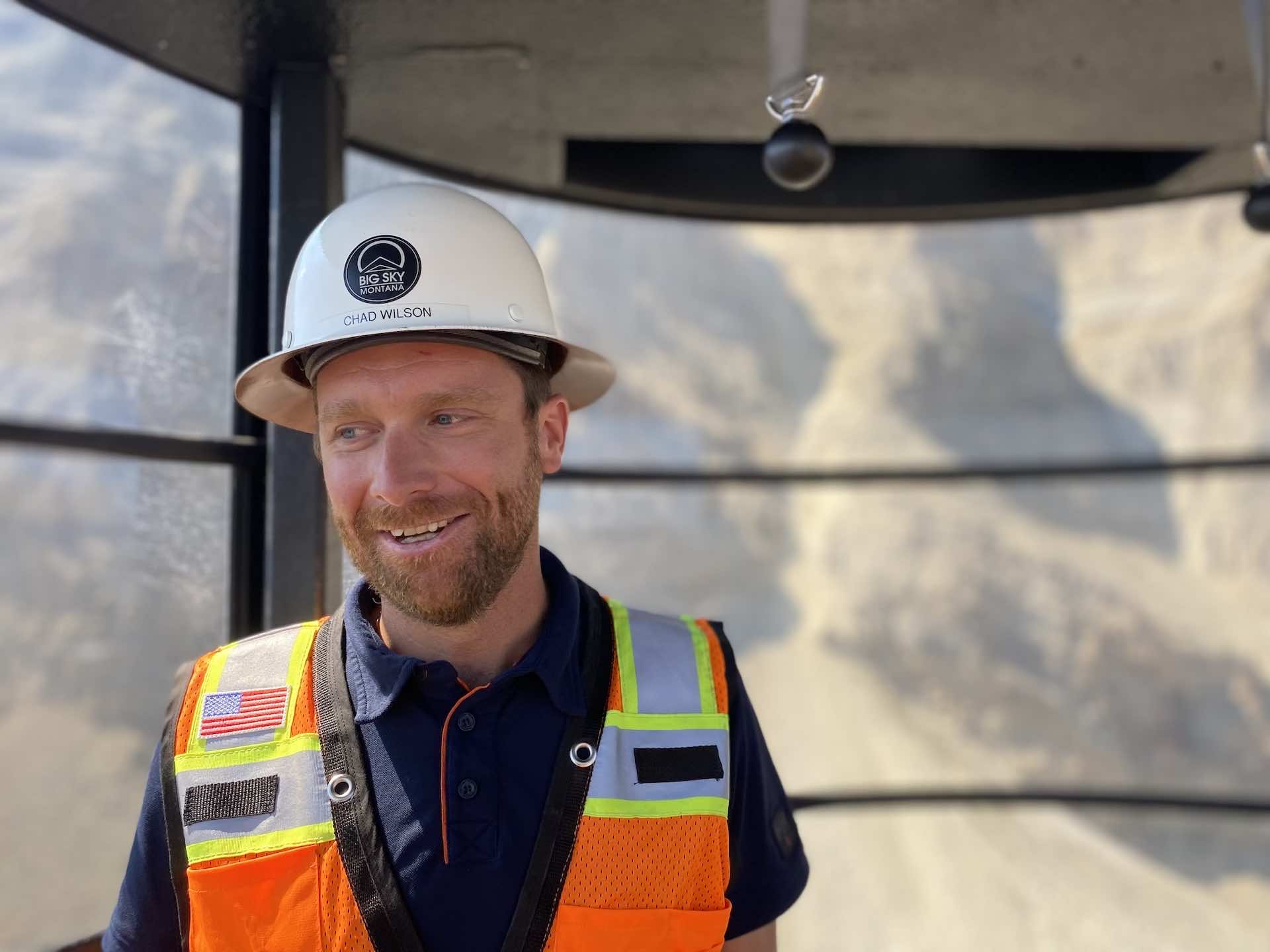 The Director of Construction Management

What does it take to keep Big Sky Resort’s vision for the future on track? Meet Chad Wilson, Director of Construction Management. Chad and his team are the driving force behind every construction project at Big Sky Resort.

Chad Wilson stares out the window of the Lone Peak Tram toward Alto Ridge, transfixed.

With the excitement in his eyes, you might think he’s headed up for a powder lap with his kids. But it’s early September, and Wilson, who oversees all of Big Sky Resort’s construction projects, is riding the old tram—lovingly called “the bucket” by skiers—to check construction progress on the resort’s new tram. 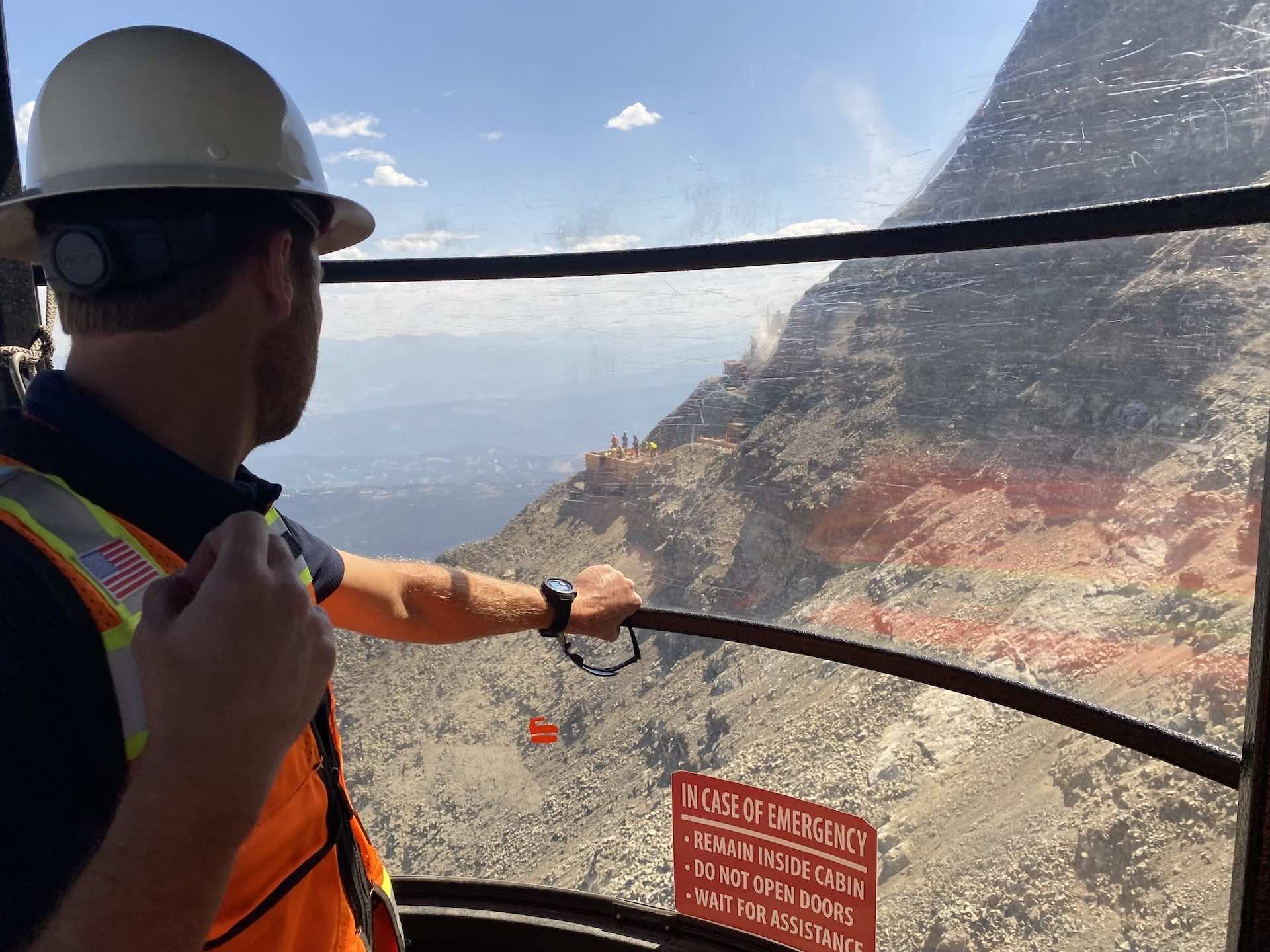 Near the Alto Ridge skyline, small crews in neon vests work on a series of three narrow platforms blasted into the mountain near a rocky eyrie known as Cron’s Pocket. They’re building the foundation for the only tower on the new tram’s nearly mile-long, 2,000-vertical-foot rise. Dust kicks up as they work.

“These guys are drilling and grouting the micropiles for one of the three footing pads for the tower,” Wilson says.

The micropiles are six-inch wide, 30- to 50-foot deep foundational structures built of high-strength steel and grout. They are designed to transfer load through the shattered rock on the mountain’s surface to deeper, more solid ground. Together with another foundational element called rock anchors, the micropiles are some of the key structures that will hold both the tower and the top terminal to the mountain. 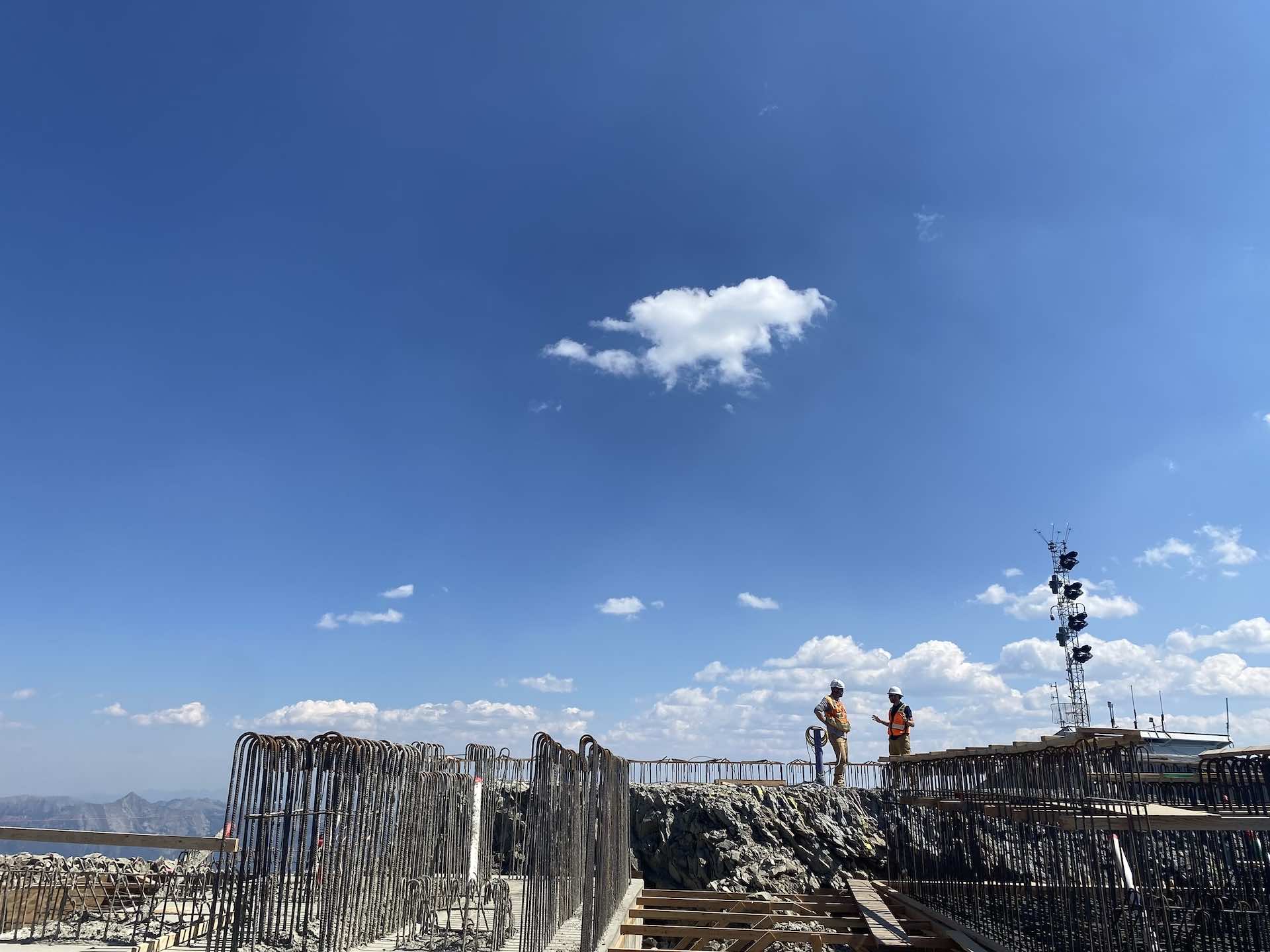 This new aerial tram is one of the projects that makes up the culmination of Big Sky 2025, a 10-year transformation to position the resort among the upper echelon of ski destinations, akin to something you might see in the European Alps. Three new state-of-the-art chairlifts, Ramcharger 8, Powder Seeker 6, Challenger, and Swift Current 6, preceded the tram build, along with renovations to nearly every hotel and restaurant in Mountain Village. The final years will include a new long-term strategy, additional base area development, and expansion of the resort’s sustainability initiative, the ForeverProject.

Wilson, 39, has been with the resort since 2020. He works closely with other resort leaders, including Troy Nedved, Big Sky’s general manager, and Stephen Kircher, the president and CEO of Boyne Resorts, Big Sky’s parent company. Wilson’s department is currently managing 22 projects, from early feasibility exploration and planning to active construction.

Normally, he’s a big picture kind of guy. But right now, Wilson is zooming in.

“The micropiles work in two different ways,” he says. “You can put weight on top of them and they resist to keep the building from moving. Or if the building wants to turn over, they work in tension, so the friction of the grout holds them in place.”

The rock anchors are also grouted into drilled holes, he explains but they work somewhat differently.

“If you imagine the cables on the front of the top terminal, all the weight of the cable and cabins are pulling on the face of the building, down the mountain. … Those anchors resist that rolling, so they work in tension.” 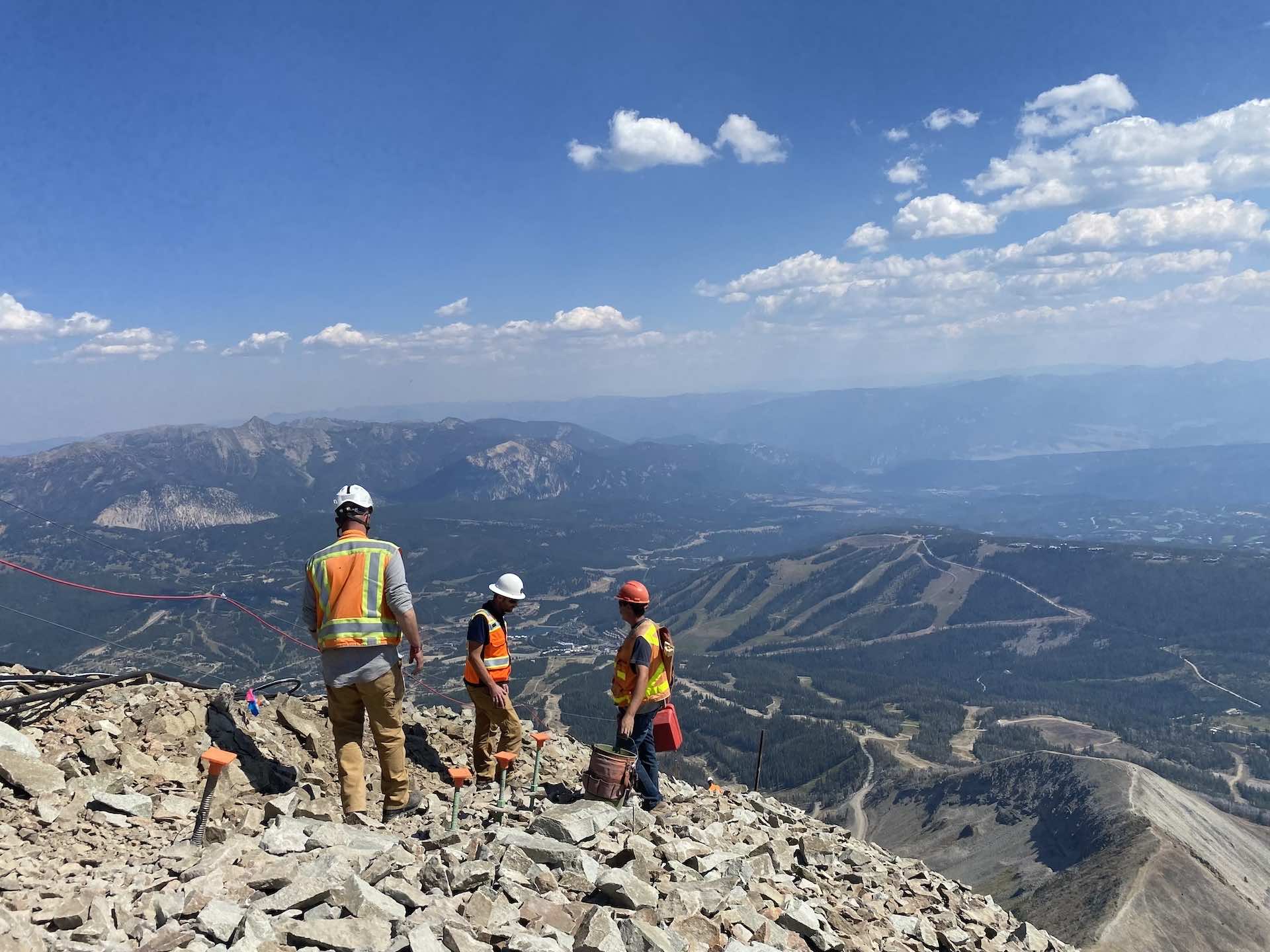 The whole project, in fact, works because of tension.

Tension strung between Kircher’s moonshot vision of a top terminal cantilevered impossibly far out over the face, his desire to preserve the mountain’s silhouette, the reality of what’s actually possible to construct, and the cost of such a monumental piece of infrastructure.

“It’s a balance between Stephen’s vision [and] how the resort actually operates,” Wilson says. “How you make this happen and make the best decisions is by having different perspectives.”

There’s another tension you can feel here, too: change. 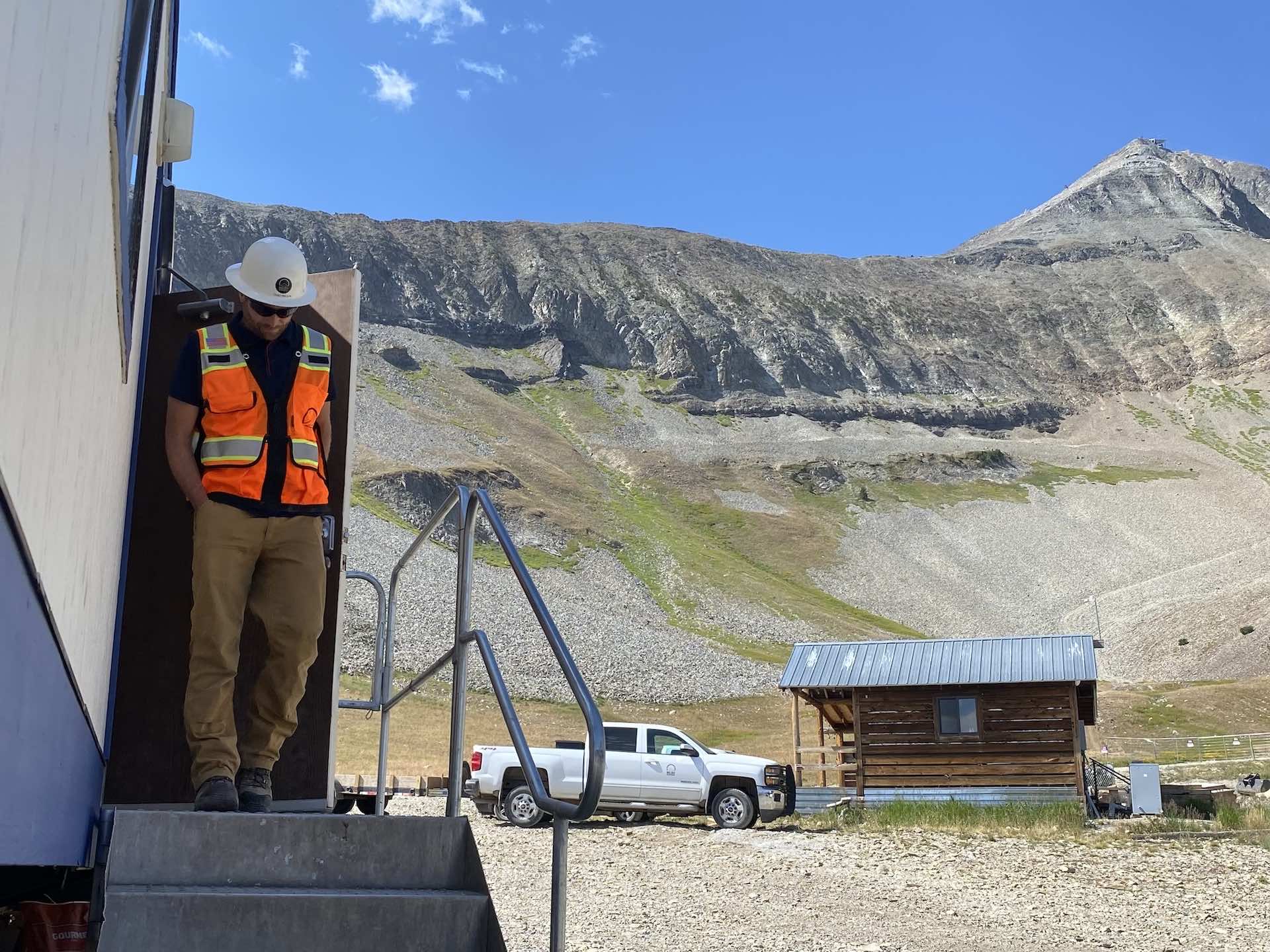 When the original tram opened on December 23, 1995, Big Sky overnight had some of the wildest lift-access alpine terrain in the country. Yet, for decades it didn’t have the crowds of other top North American ski resorts.

“There’s no other in-bounds ski experience quite like it,” said Mike Buotte, the resort’s snow safety director and a patroller here since 1995. He describes a spiritual connection to the mountain.

“I wouldn’t say it has a backcountry feel, but it does have a wild aspect to it, that it hasn’t been tamed. You feel the forces of nature like the wind, the exposure, and the altitude. … I’ve always liked that about Lone Mountain. The mountain still exists. It’s not just a ski hill. It’s a mountain.”

That connection is something many people express, whether they’ve been the Big Sky once or have been skiing here for 30 years.

Both Wilson and Tom Marshall, the resort’s VP of mountain operations, often field questions about how the new tram will change things, especially with its carrying capacity of 75 compared to the original’s 15.

Marshall’s answer is that his department will manage skier numbers on the tram based on snow conditions. He says there will be separate lines for skiers and scenic riders, and that they don’t plan to fill the tram cabin. He also noted that once complete, the entire gondola-tram-restaurant complex will be ADA-compliant, allowing wheelchair access to the summit. 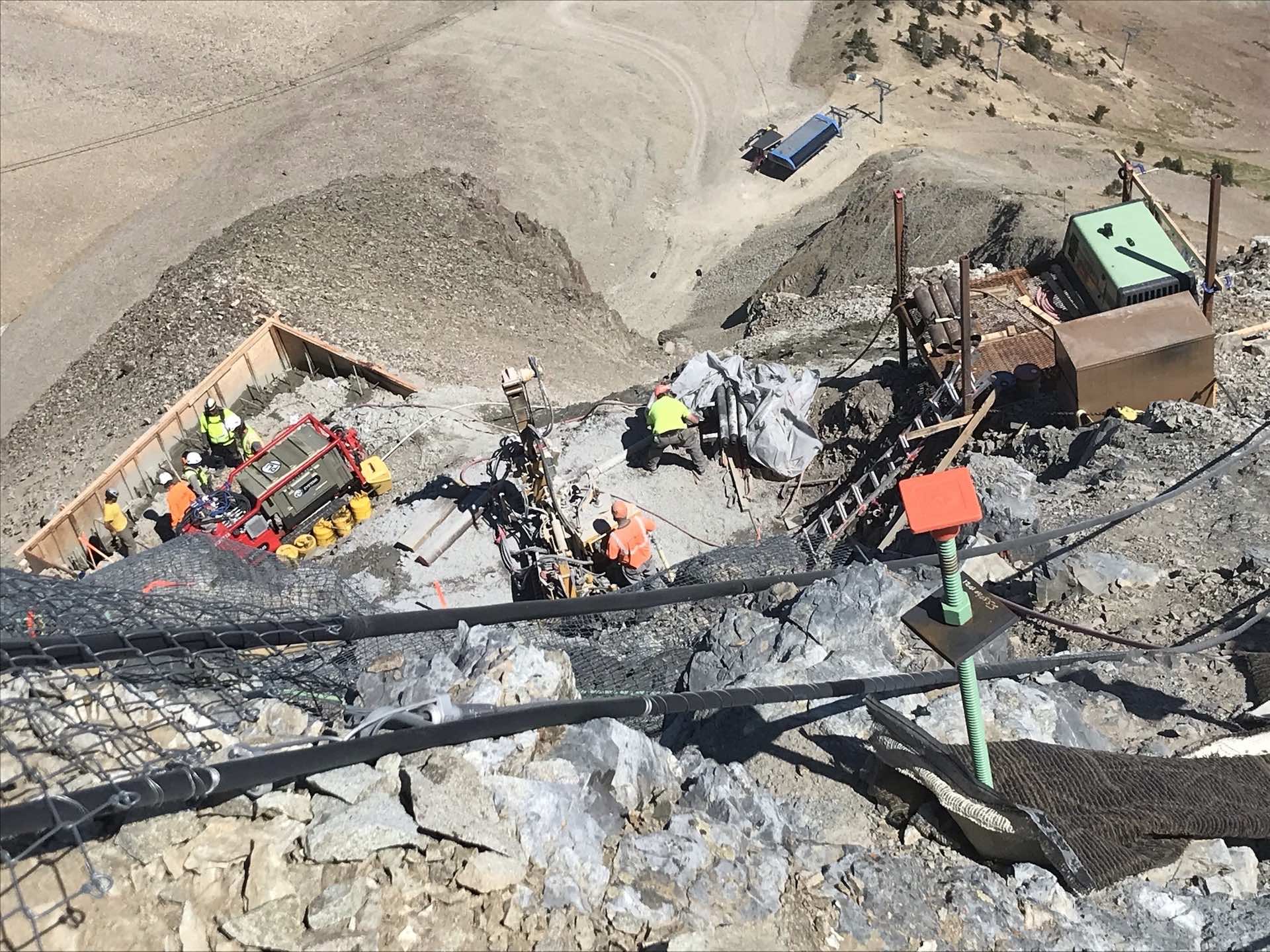 Near the top, the tram slows as it docks.

“Howdy,” Wilson says, greeting the tram operator as he slides open the door.

Outside, the air is calm, and it’s probably 70 degrees. Small, summer clouds seem to stand still in the sky. It’s 1 p.m.

Wilson hoofs to the peak to meet Ryan Thorne, who manages construction at both this site and the tower for Condon-Johnson & Associates, a geotechnical contractor that specializes in complex installs in difficult locations.

Standing on a concrete platform built into the summit proper, the men lean their forearms on a two-by-four railing as Thorne catches Wilson up on progress.

They walk over a rock anchor, which sticks out of the ground at a 45-degree angle.

“The rock feels all loose and crumbly, but it’s solid [down deep] where the [rock] anchors are,” Thorne explains. “We pulled 404,000 pounds against that rod to test it. The tram won’t even put that much, and we’ve got six of them, plus all the foundation.” 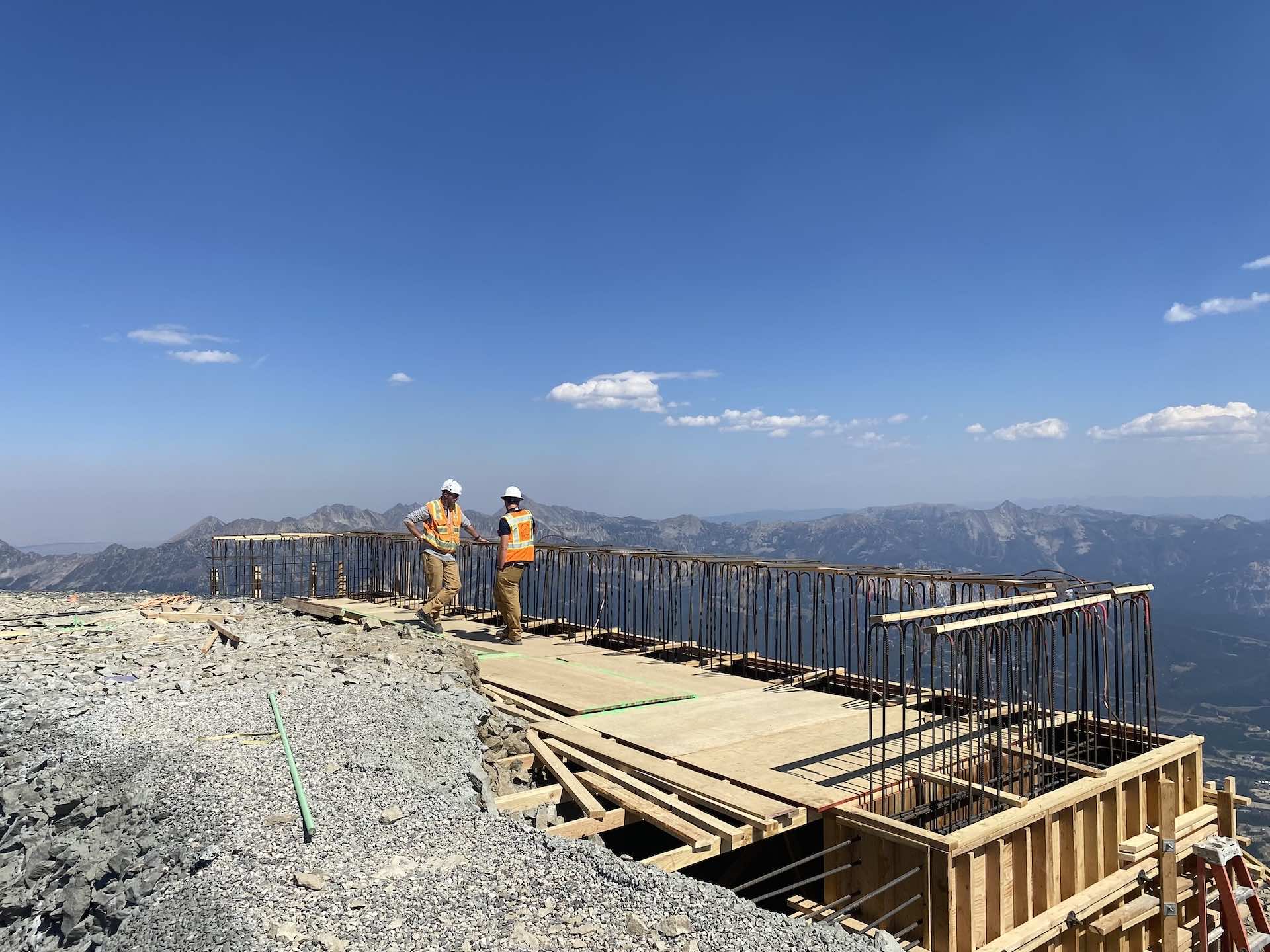 Hiking down Alto toward the tower jobsite, they pass workers carrying buckets and surveying equipment back up. Above the staging area, they stop to discuss details about helicopters, rebar, and billing.

One of Thorne’s employees, Mike Graf, walks up the steep, rocky slope, and I ask him about the equipment below us.

Graf points out a water tank with a heater attached to it and a pallet stacked with 94-pound bags of cement. To make grout, he and his co-workers pour the bags into a yellow, cylindrical mixer and then add water heated to 75 degrees, which makes the grout set up faster.

“There’s ice layers in the rock, and I want the grout to start curing before it freezes,” says Graf, who’s been on Condon’s drill crew for eight years.

On the walk back up, I ask Wilson what he does for fun. Last weekend, he says, he raced in the Big Sky Biggie, a 60-mile mountain bike race with 10,000 vertical feet of climbing. He trained by riding “a boatload” in July and August, including a 10-mile, 1,500-vert ride to and from work three to four days a week.

Wilson has a degree in building construction management from Michigan State University, and worked as a carpenter during college. Before they came to Big Sky, he and his wife, Beth, lived in 11 different homes in 11 years, following construction jobs around Colorado from the Front Range to Eagle County and Steamboat Springs.

They wound up in Big Sky when his company landed a four-year project elsewhere in the area in 2016. They decided to buy a house, even before his company finalized the full contract.

“We were like, ‘This place is awesome,’ and we didn’t want to pay rent,” he said. “We just figured we’d stay.”

Their second son, TJ, was born at Bozeman Health six months after they moved here. He’s now a kindergartener at Ophir School, where his older brother, Levon, is in third grade. Beth, who previously worked as a special education teacher, is now assistant director of the adaptive snow sports program in Big Sky, Eagle Mount. Wilson is on the board of the nonprofit Big Sky Community Organization, and has volunteered for the local climate action group, Big Sky SNO. 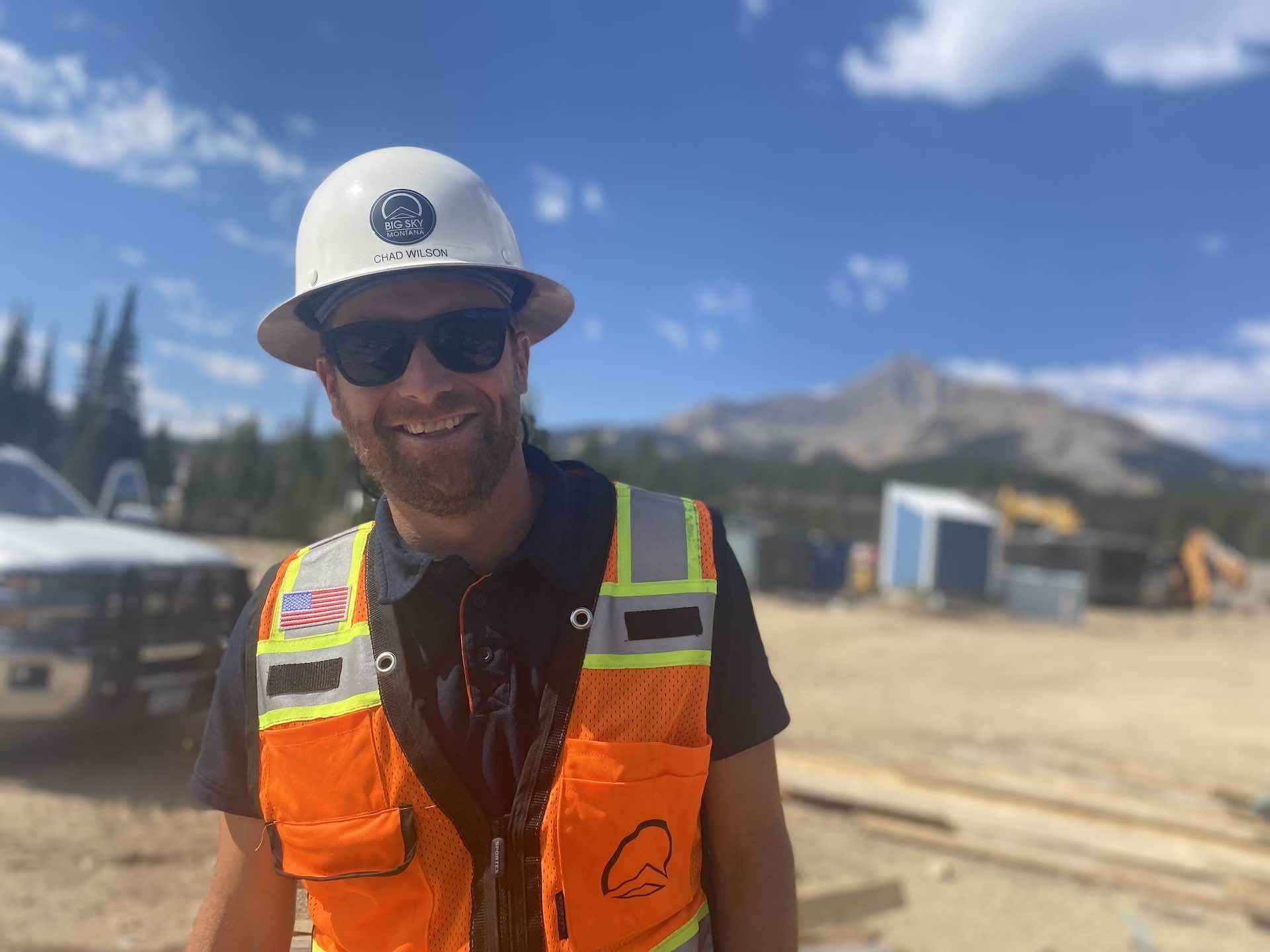 We board the tram to head back down—the old bucket, that is—at 2:30 p.m. For Wilson, it’s already been a full day.

First thing in the morning, he facilitated a two-hour Zoom meeting to review progress on the tram. Around 20 people join the meeting each week, including teams from Garaventa, the Swiss company that designed the tram and Garaventa’s sister company, Doppelmayr, a chairlift manufacturer based in Salt Lake City and Wolfurt, Austria. Civil engineers from the Bozeman-based Gaston Engineering were there, as were structural, mechanical and electrical engineers, and managers from Condon-Johnson and Jackson Contractor Group, the Missoula-based contractor building the bottom terminal.

Next, Wilson checked on job sites including a new team member housing building, the Mountain Village umbrella bar, and two parking lots that are getting resurfaced.

On his drive up Mr. K to the tram base, he stopped by the future gondola mid-station to check on logging; swung by the helicopter staging site at the base of Challenger; and spoke to job site managers at the tram bottom terminal.

Of all the projects, Wilson is most excited about the future restaurant in the Bowl, which he calls the “crown jewel” of the multi-year tram-gondola project, both for its artistic design and hopeful LEED certification.

Wilson is a LEED-accredited professional, and his work in Colorado included several LEED-certified projects.

“Chad brings so much experience on large projects,” said Caleb Teigen, a construction manager for the resort who’s known Wilson since 2006, when they worked together in Colorado. In all that time, Teigan says, he’s never seen Wilson upset or even ruffled.

“He's always got a calm, clear head, and he’s very enjoyable to work with,” said Teigen, who is Wilson’s only direct report. “He’s just a real steady dude.”

Wilson will tell you he spends six hours a day in meetings, but there are also spreadsheets to manage, budgets to report on, ongoing master planning with the resort’s leadership team, and curveball problems to solve, like helping contractors find summer housing for their employees. And he’s part of a team convening construction leaders from across Boyne’s resorts to design building efficiency standards. 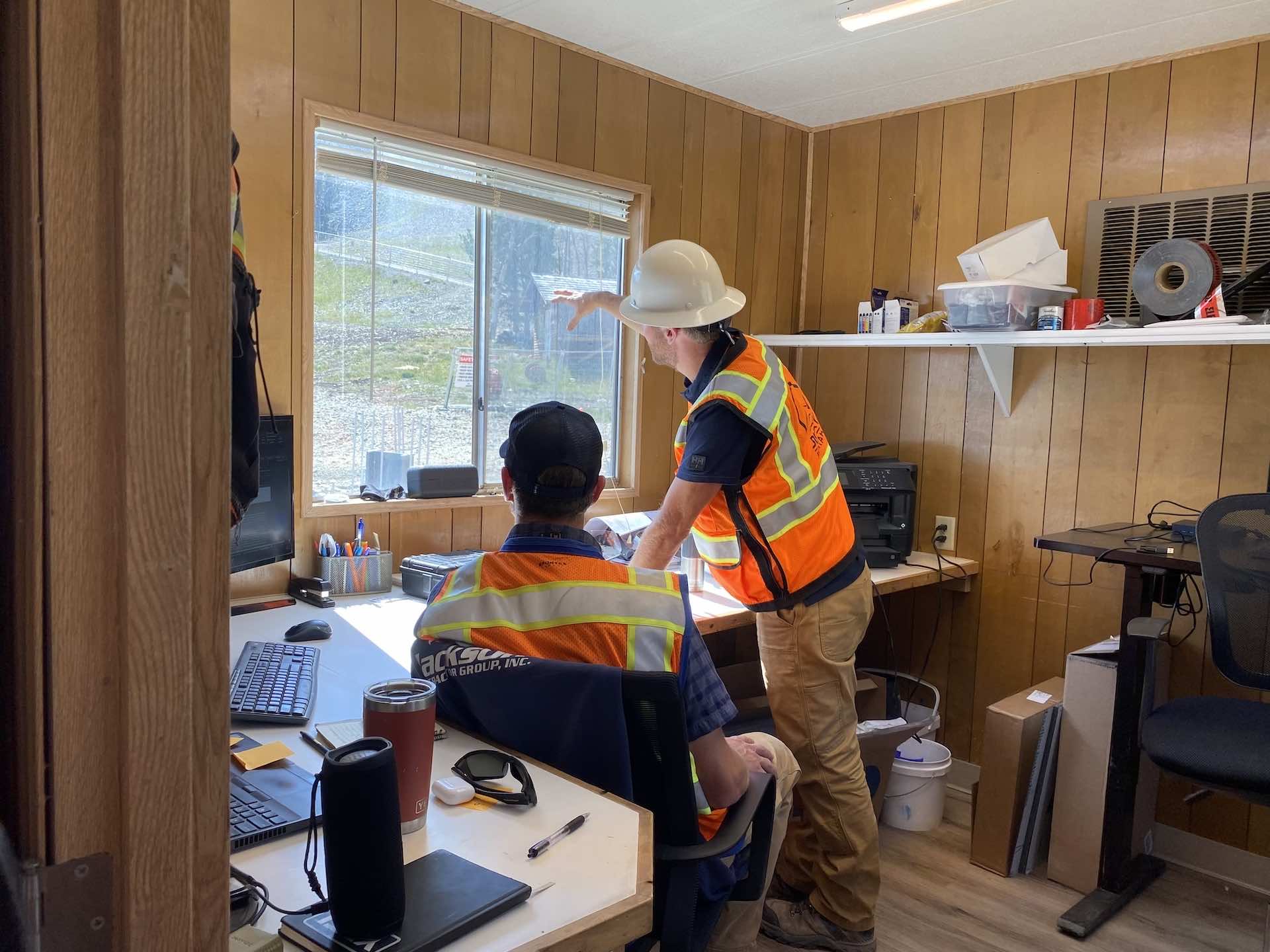 Back at the base area, Wilson parks his truck in the drop-off lot below the Exchange and gets out. He’s got another meeting with architects and contractors for the team member housing building by Lake Levinsky and phone calls to make for upcoming projects—there’s the new administration building, employee lockers, a composting toilet up at Shedhorn Grill, and a centralized storage and distribution center.

“I’m glad we went up there,” he says, as he shoulders his backpack. “There was nothing specific, but so much of what I do is about checking in with people and relationships.

“I enjoy collaboration and working with people. That’s probably what’s most fun about it.”