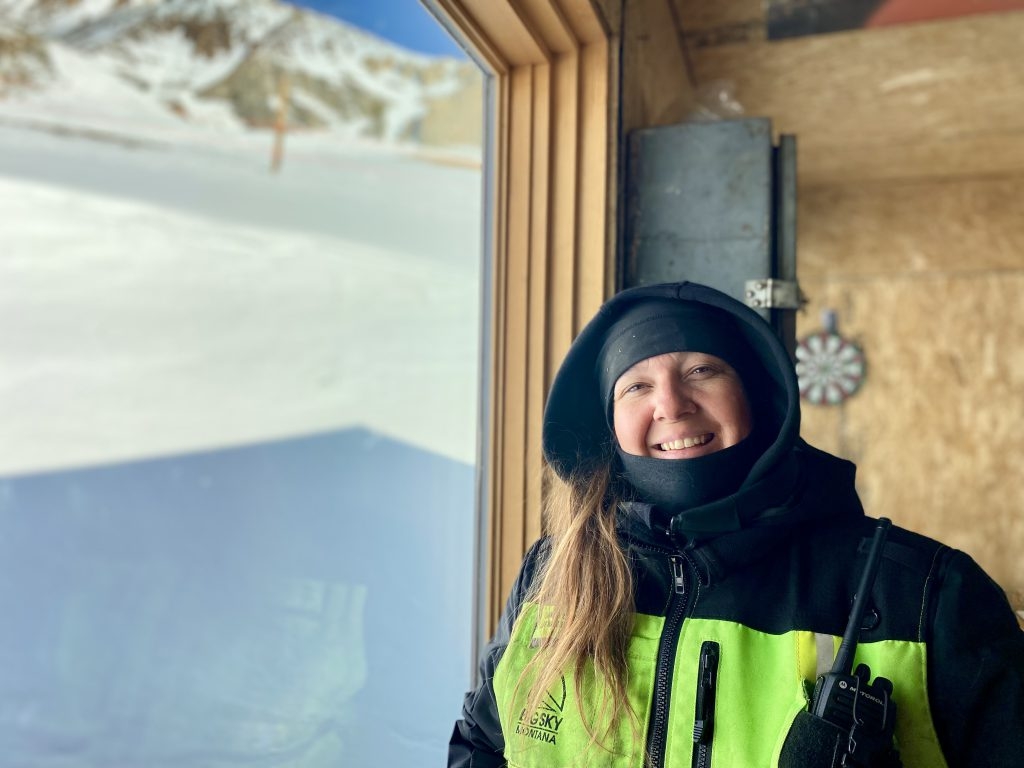 Laurel Blessley pulls on her ear protection and then starts the tram’s auxiliary engine.

To the untrained ear, the diesel sounds like a series of enormous rumbling belches, but Blessley’s pleased.

And she would know. Blessley, who’s one of two managers of the resort’s lift maintenance department, worked as a tram operator for four years from 2002 to 2006, back when the lift maintenance team was in charge of running the tram, and she’s been on the team that’s maintained it ever since.

She throttles the engine up, and it gets louder.

It’s 7:30 a.m., and the two of them have already cleaned out the diesel injectors on the auxiliary engine, which runs not the main haul line where the tram cars hang, but the tram’s rescue rope. It also serves as a backup engine for the main one, in case the power goes out.

The tram operators are doing their daily inspections of the motor room, cabins, and grips. Until last year, Blessely trained them on these daily checks, but this year Curtis Langlois, who’s been working the tram year-round several years, took over the job. Langlois’s crew runs the diesel every morning to knock rime off of the rescue rope, and they’re the ones who noticed that it needed some love after the recent cold snap.

Maybe you’ve seen Blessley or another member of the multi-talented, 40-person lift maintenance crew show up to restart a lift. In winter, they’re like superheroes in grease-stained neon vests, always on call to keep skiers in the goods. At 40 people in winter and 32 in summer, it’s the largest, full-time, year-round department at the resort.

“We’re like firemen in a way,” Blessley said “We’re here and ready to respond to any situation.”

Most of the team is posted at one of five zones around the mountain, poised to troubleshoot anything on one of the 39 lifts their team of mechanics and electricians helps maintain. While posting, they might be rebuilding grips, walking through motor rooms, or watching the line on a windy day to make sure the chairs are running safely. They’re responsible for parking both Swift Current 6 and Ramcharger 8 in the chair barn every night, and sometimes Powder Seeker, as well as feeding the chairs back out onto the line in the morning.

For Blessley, there is no typical workday. She’s just as likely to be out doing a project as she is to be in the office ordering parts.

The job has changed significantly, especially in the last five years, when Big Sky began installing the most technologically advanced chairlifts in the United States, starting with Powder Seeker, Ramcharger 8, and Swift Current 6. 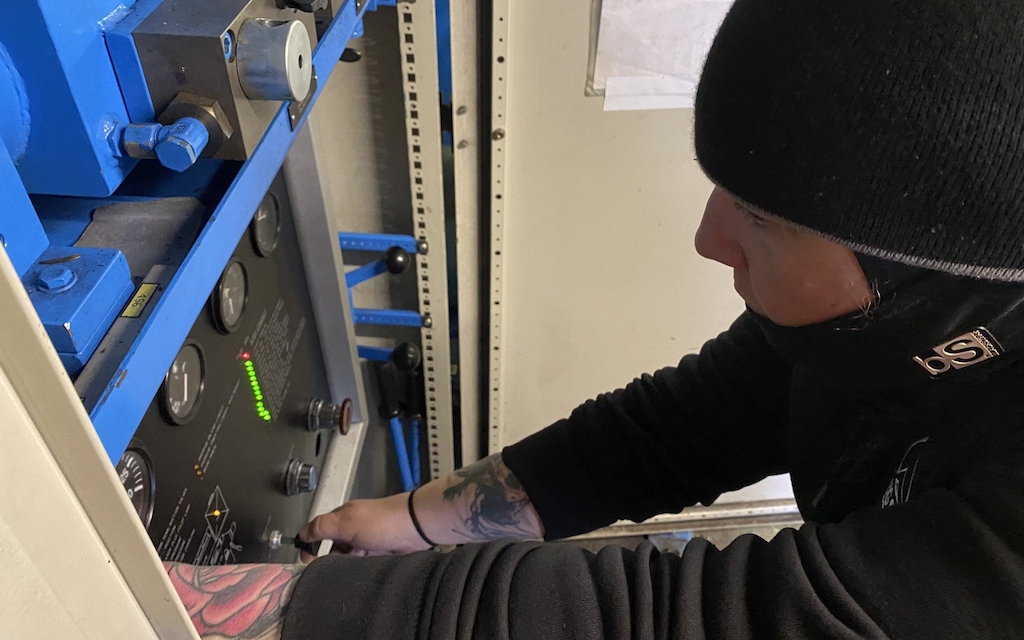 These complex machines require significant maintenance, Blessley said. Think about it this way: Your car generally has one programmable logic controller, or PLC, while Ramcharger has 20. These are basically mini-computers that run the software program which runs every part of the lift.

It’s a crisp 20 degrees when Blessley walks back outside. A few wispy clouds move over the A-Z Ridge but otherwise, the sky is clear. She snowmobiles down to the base of Powder Seeker, parks behind the chair barn, and says hi to the lift operators, who are setting up the corral for the day. At the back of the chair barn, she opens the door into the grip bay, and climbs a ladder to the loft. Here, the Bowl crew rebuilds grips and sheave wheels, which are the wheels the chairs run over on the towers and in the terminals. They also do nondestructive testing on chair parts and grips, which means using magnets to search for cracks invisible to the naked eye. Recently, they built a few new workbenches that she’s been wanting to check out. 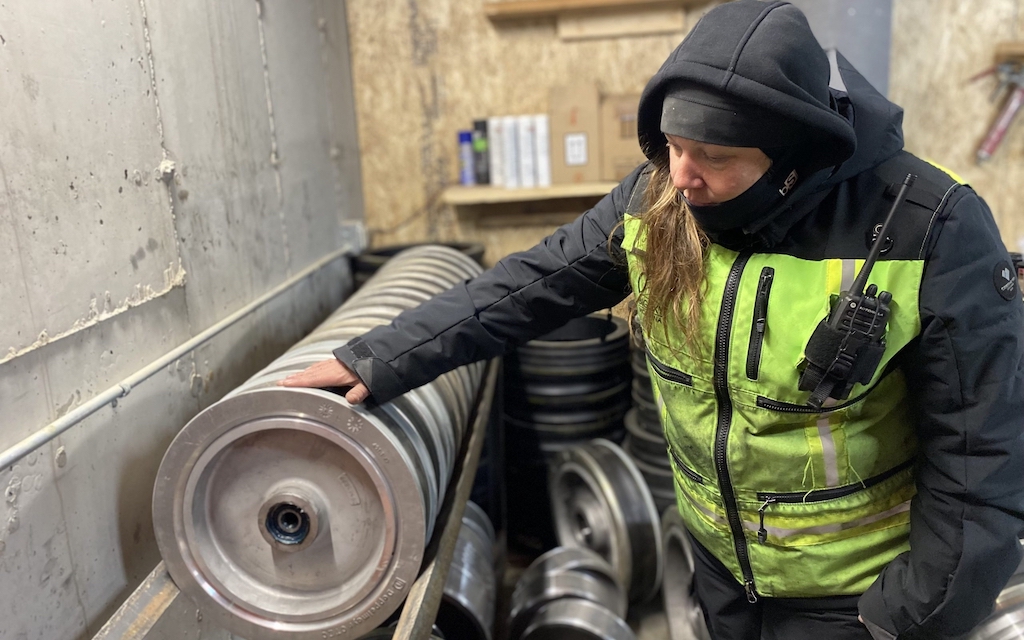 “I’ve been in the department almost 20 years,” she says, looking out the window as the Powder Seeker chairs move uphill. Morning light falls on her face.

“I’ve been a helper, I’ve been through leading a crew and maintaining my set lifts, and became a foreman a number of years ago. …It’s way different than what it was. But it’s very exciting—new tram, gondola. Things like that.”

Blessley, 41, moved to Big Sky with a friend in 1999, after graduating high school in Glenwood Springs, Colorado. The plan was to stay for one winter.

That first year, she worked at Guest Services, and then stayed for the summer, running the old gondola for mountain biking and scenic tours. Although she’d never had any interest in mechanics before that (“in high school, I was more interested in going to metal and punk shows and rallying around with my friends”), something about it stuck. She worked lift operations the following winter, too, and then lift maintenance the next summer.

Born in Fairbanks, Alaska, Blessley also spent a few years as a kid in Boulder, Colorado, but at this point, Big Sky is the place she’s lived the longest. She learned to snowboard here, met her partner, Matt, here, and together, they’re raising a daughter, Hazel, who’s 7.

In 20 years, she’s helped change the tram haul rope twice, rebuilt bull wheels, removed old chairlifts, and traveled to the Doppelmayr factory in Austria, among many other things. 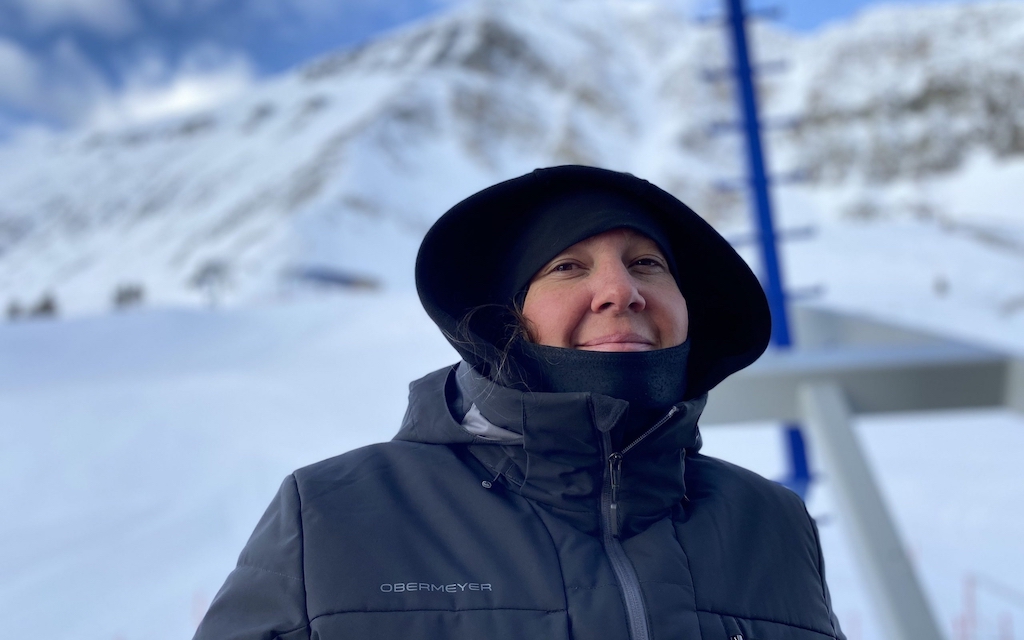 If you’ve worked lift maintenance as long as Blessley, you know what’s next when someone hears what you do for work. Everyone wants to know what you do in the summer.

Summer, in fact, is when lift maintenance hammers down.

During the offseason, the crew conducts inspections, and does preventative maintenance and repairs on Ramcharger 8, Swift Current 6, and Explorer, getting the lifts ready for summer opening in June. There’s also work to be done on the tram, which the construction crew for the new tram will use to access their job site. Other scheduled maintenance includes rebuilding chairlift grips, 20% of which get rebuilt every year, which equates to around 360 of the resort’s 1,812 total chairs.

And of course, there are big projects on the books. This summer that means changing out the Six Shooter haul rope, upgrading the controls and hydraulic brakes on Thunder Wolf, and rebuilding gearboxes on Headwaters and Iron Horse.

“The nature of the job is high stakes and big consequence, and so we’re all trusting each other all the time for safety,” Blessley said. “The team ends up being really close, because those people have your life in their hands.”

Being one of the only women in the department, and at times the only one, has pushed Blessley to be a creative problem solver. When she couldn’t reach the tower ladders on the old Swift Current lift, for example, she built a portable ladder with hooks like a boat ladder, which let her climb up to the base of the tower ladder.

“This job has helped me create confidence in all aspects of my life, not just work,” she said.

When Trey Theard, now the department’s other manager, left ski school in 2013 and started as a helper in lift maintenance, Blessley was already a veteran mechanic. Laurel taught him countless things, Theard said—how to check the bullwheel oil at Little Thunder, how to travel on the mountain, especially on an avalanche control day, and that if you can’t get a truck in 4-wheel drive, to try putting it in reverse to let the gears mesh.

“She looks real hard and tough—and she is when she needs to be—but you could tell her anything you need to tell her, and she’ll listen,” Theard said. “She’s a good welder and fabricator, too. She’s got a lot of skills.”

Outgoing lift maintenance director Eric Schwartz called Blessley one of the hardest working people on the mountain. “She’s incredible,” he said. “She cares about this place deeply.”

Like Blessley, Lone Mountain is defined by contrasts. The beauty and the harshness. The elegant ski lines and the ragged cliffs. The 100-mile views and the ferocious storms. They’re part of what makes it so spellbinding to so many, Blessley included.

“I don’t know how to say it without sounding really sappy, but it’s the mountain that keeps me here,” she said. “It’s my home. It’s little moments like driving up and watching the sun come up. It’s the feeling you get when you’re up here—on the summit or the ridge, anywhere. I don’t think I’d want to be anywhere else.”